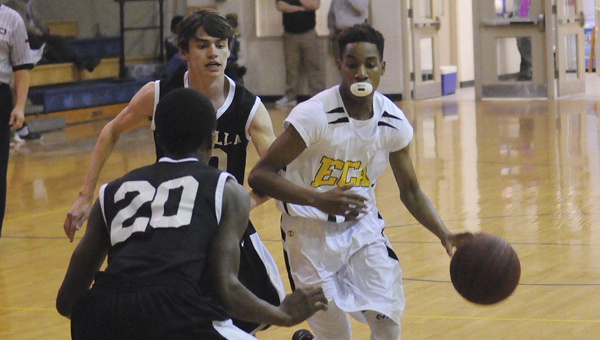 Ellwood Christian’s T’Markus Simmons dribbles toward the basket Monday in the Eagles’ game against Isabella. The game was played as part of the class 1A, area 5 basketball tournament in Orrville. –Daniel Evans

ORRVILLE — Ellwood Christian made school history Monday with a 73-23 win over Isabella in the first round of the class 1A, area 5 tournament. The victory guaranteed the Eagles their first trip to the Alabama High School Athletic Association’s sub-regional round of the playoffs.

They also get a chance to win their first area championship Wednesday against No. 3 ranked Keith in Orrville.

“It’s a great victory for Ellwood Christian Academy,” said Eagles head coach Darrell Walker. “We have a big game coming in on Wednesday but we are going to … have a little fun tonight and go back at it tomorrow.

Ellwood joined the AHSAA in 2012 and had never made it out of the first round of the area tournament. On Tuesday night, they took control early and cruised to one of their biggest wins of the year.

“That was the ultimate motivation, win or go home,” Walker said.

Rayford Mitchell had three fast break layups in the first four minutes as the Eagles took an 11-1 lead. Marvin White and Arietie Asubop each knocked down 3-pointers to push the lead. Chris Lee also knocked in two short jumpers, helping Ellwood take a 26-5 lead after the first quarter.

The game was never in doubt from that point on. Ellwood led by 30 or more from the final minutes of the second quarter throughout the rest of the game. Twelve Eagles players scored in the game in all, led by Mitchell’s 13 points.

DeVante Sanders was the only other Ellwood player in double figures with 10 points.

The Eagles will now set their sights on beating Keith in Orrville. The Bears won the first two meetings this year 62-29 and 71-23. Walker said the key to getting a better result the third time will be focusing in.

A win would mean the Eagles get to host a sub-regional playoff game, instead of having to play on the road. Walker said that’d mean a lot to his team’s seniors.

“We are trying to get back to the Eagles nest,” Walker said.

ORRVILLE — Ellwood Christian hung around for most of the night, but the Eagles couldn’t rally against Isabella and saw their season come to an end.

The Mustangs led by at least eight the entire second half in a 58-42 win in the first round of the class 1A, area 5 tournament in Orrville. The Mustangs move on to play defending 1A champion Keith in the area championship game, while Ellwood (0-22) saw a second consecutive season end without a win.

“They didn’t play too bad of defense tonight, but they missed some opportunities,” said Ellwood coach James Spears. “During the third quarter, we had six opportunities to score where they didn’t score down there, and we couldn’t take advantage of it. It was there for us.”

Brianna Dower scored 19 points to help the Eagles stay in it, including two 3-pointers in the second quarter that trimmed a 17 point Mustangs lead to 11. A jumper by Monique Jones pulled Ellwood to within 36-27 at the half.

In the third quarter, Isabella regained a double-digit lead on a layup by Synia Chattman and led by at least ten the rest of the night. Sophie Underwood scored 15 points to lead Isabella and Caley Booth chipped in another 14 points.

However, he’s proud of the progress the team made this year.

“Last year they played five or six games where they didn’t score in double figures,” Spears said. “They played some good ball this year. We’ve just got to learn how to get a lead and hold a lead.”

Isabella will play Keith Wednesday at 5 p.m. Both teams are guaranteed to move on to the sub-regional round, but the winner will play at home.