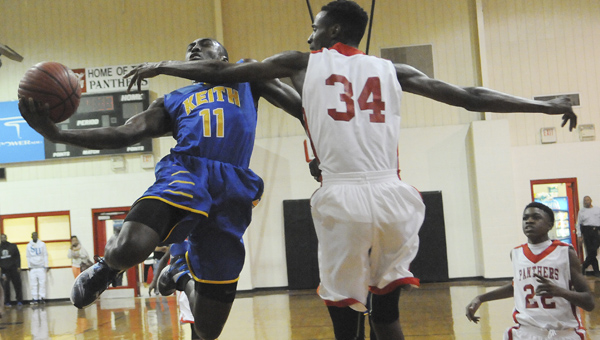 Keith defeated Southside for the third time this season Friday night, but the Panthers didn’t make it easy. Unlike the first two matchups, Friday’s outcome was in doubt until Lee Underwood’s 3-point try at the buzzer rimmed out.

Keith led nearly the whole game, seizing control midway through the first quarter and never trailing afterwards, but Southside (7-9) never let the Bears get completely away. In the final minute, the Bears clung to the lead and eventually held on for a 56-54 win.

“We made a lot of careless errors, regardless of what Southside was doing,” said Keith head coach Tommy Tisdale. “We gave them an opportunity to win the game there at the end when it should’ve never gotten to that point. We were up six with the ball with two minutes left. They should’ve never gotten another shot.”

The Bears had a 33-22 lead going into halftime and looked as if they might run away. Southside had already stormed back from a 10-point deficit to get within two, but Keith went on a 13-4 run to the end the half to remain in control.

In the final period, Keith took a 10-point lead again on a layup by Jimmie Powell, but Southside refused to go away. Price scored 11 of his 21 in the final quarter to keep the Panthers in it. He tipped in a miss with 2:11 left and knocked in a layup to pull Southside within 56-52 in the final minute.

Nicholas Bennett made a layup with 5.8 seconds left to pull the Panthers within two. Keith missed a free throw and the Panthers ran the ball down the court. Underwood got a decent look, but couldn’t get his potential game-winning shot to drop.

“I had no timeouts left,” said Southside head coach Cedric Brown. “We have a play we run every day in practice and they cut us off. We still got the ball into the hands we wanted to get the ball into but he double clutched his shot because somebody flew at him.”

Tisdale praised Powell for his effort in the fourth quarter. Powell made three contested baskets, including a put back to put the Bears’ up 56-50 with under two minutes to play.

“He came in with high energy and he made two or three baskets with defenders draping his arms,” Tisdale said.

As close as the game was, Southside only led a few seconds in the first quarter. The Panthers had a 2-1 and 4-1 lead before a three-pointer by Mark Young tied the score.

Technically, Keith was in front from that point on, but it probably didn’t feel like it.

It was a physical game, especially in the second half. At one point, Price dove over the scorer’s table and into the crowd trying to save a loose ball. Later, Pettway fell into the table and walked away limping. He stayed in the game and led Keith with 22 points.

“I thought the second half, honestly, on both sides — I thought it got extremely too physical for basketball, but I’ll take a win however we can get one,” Tisdale said. “Gutting it out this time of the year is good,”

Although the Panthers lost for the ninth time in 11 games, Brown said he saw the team he’s been hoping to have all year in Friday’s game.

“That’s the team I’ve been looking for. Defensively, the passion, the heart — everything was there,” Brown said. “Hopefully, we can take that same attitude into area contests so that we can bounce back and get on top in the area. Our goal is to host the area tournament and that is still possible.”

Southside will host Thomasville Tuesday, while Keith will play at Bibb County.

During last season’s championship run, Keith wasn’t a very deep team. In the offseason, the Bears put an emphasis on changing that this season.

If Friday night’s game was any indication, it looks like they’ve more that succeeded.

“We are working out a lot on our boxing out and rebounding and we did a good job on that tonight,” said Keith head coach Cecil Williams. “We have a tendency sometimes not to move like we should so I have been putting an emphasis on boxing out and being more aggressive and it showed tonight.”

In the third quarter, Harriet Winchester scored 12 of her 14 points, including knocking down back-to-back threes in the final 20 seconds. Zykia Pettway had 12 points and Shatavia Moore had 11 points.

Southside head coach Kayla Mason said her team showed a lot of improvement from the first two meetings with Keith this season. She was especially proud of Kionnah Page, who had 14 points, 10 rebounds and four steals to lead the Panthers.