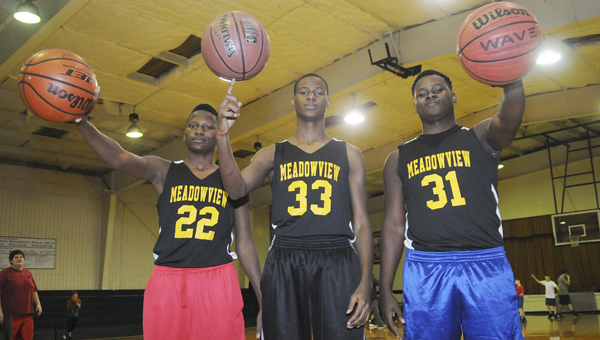 Brothers Kaymon, Justin and Jevar McGuire are helping to carry the scoring load for Meadowview Christian this season. All three brothers start for the Trojans and have played a role in helping Meadowview get to 3-3 on the season. –Daniel Evans

A large chunk of the Meadowview Christian basketball team’s scoring comes from one family.

The Trojans have relied heavily on brothers Jevar, Justin and Kaymon McGuire, who combine to score more than 70 percent of the team’s points this season. All three start and all contribute in their own unique way.

On Tuesday night, head coach John Robert Morton said the trio played one of their best games of the year in a 53-47 win over Cahawba Christian. Together, they scored 38 of Meadowview’s points.

“Every time we play we get better and last night, that brother intuition we talk about, I didn’t feel like we’d had any the last few games,” Morton said. “Last night was really the first time I saw them thinking what the other one was thinking without having to talk.”

Jevar said every now and then Justin, who plays point guard, will cut his eye one way or the other, motioning him which way to move for the ball. Other times, it isn’t that easy, but he said knowing each other as well as they do makes a big difference on the floor.

The win moved the Trojans back to 3-3 on the season and gave them some momentum going into the December portion of their schedule. It also gave some hope to a team that got off to a rocky start, but is hoping to compete for an Alabama Christian Athletic Association championship.

If the Trojans do play deep into the playoffs, they’ll do so in part because of the McGuire brothers, who all have different skill sets and in turn help the team in different ways.

Jevar, a senior, is the player on the team with the most experience. He scores most of his points inside and is the team’s leading rebounder. He’s also the most talkative of the brothers and the oldest, meaning his high school career is winding down in the next few months.

Justin, a sophomore, plays point guard and excels at driving to the basket. Both Jevar and Kaymon say that on most days, Justin would probably win a one-on-one tournament among the three.

However, if they were playing horse, all three agree Kaymon would be the guy to beat. He spends hours in the gym practicing unusual shots, such as shooting from mid court or spinning around and throwing the ball up from wild angles.

He’s also pretty good at shooting regular jump shots too. Although he doesn’t score as much as Jevar and Justin, Kaymon has developed into one of the best shooters on the team and is a threat to score any time he gets the ball.

All put together, all of those different strengths make Meadowview tough to guard.

“They always score 50 points between the three of them,” Morton said.

“That sometimes wins. We are real long on defense and if we play that zone and we trap like we’re supposed to, it makes things very difficult on the other team.”

After games, they sometimes talk for three hours trying to figure out what went right or to wrap their minds around a loss. Sometimes they disagree about a play, but they always find a way to talk it out.

“I’m not going to say we don’t argue because every family argues, but it’s just something typical brothers do,” Justin said. “Sometimes it’s good, something it’s bad but most of the time it’s good to argue because it lets us know that we care about the team and about winning.”

There’s still plenty of basketball to be played this year, but they realize it’ll wind down quickly.

Once it does, Jevar will graduate and Justin and Kaymon will have to work toward junior seasons without their older brother on the floor. For now, they are enjoying playing together and dreaming of winning a state championship together as a family, which they all agree would be quite the feat.

“It’d be something that could be in the history books,” Jevar said.