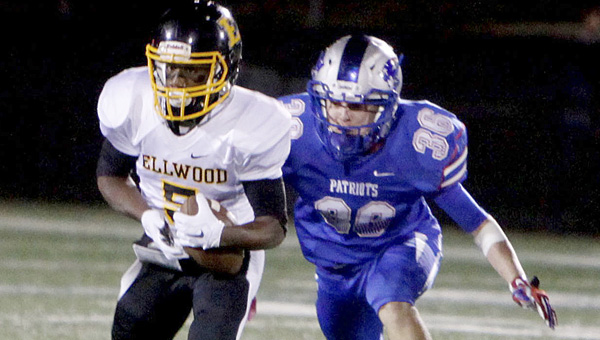 By Kelly Sims | The Tuscaloosa News

It took only one offensive play for the Patriots to get on the scoreboard. Kade Young found Deacon Medders, who made an acrobatic catch for a 78-yard touchdown. The Patriots went up 7-0 and never looked back.

ACA went ahead 46-0 late in the first half and then took a 53-6 lead into the locker room at halftime.

Squires finished with 12 rushes for 168 yards and five touchdowns. All of those carries came in the first half.

“It’s always good in front of the homecoming crowd to have a game where you take control early,” ACA coach Chris Smelley said. “It was good because lots of guys got to play and get experience. We have a big week next week against Aliceville. It will determine how things shake out in the region.”

“We just came out and wanted show as much pride as we possibly can,” Ellwood Christian coach Trey Pike said. “They are a great team. They are ranked in the top 10 in Class 3A, which is much bigger than us.”

ACA did not do much in the second half. The highlight was a fumble recovery late in the game by Brady Milligan. Young finished with three touchdowns passes.