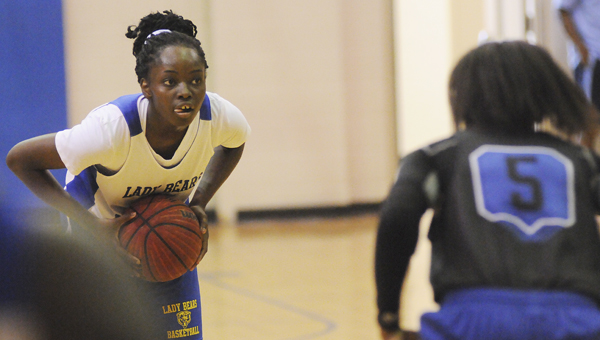 Keith’s Harriet Winchester holds the ball as the Bears set up a play in the final minutes of their game Monday against Demopolis. The game marked the first time Keith, the 1A girls state champions, had taken the court since winning the championship earlier this year.–Daniel Evans

ORRVILLE — Going into Monday, it had been six months since the Keith Lady Bears basketball team lost a game.

The 1A state champions played their first game of the summer Monday during a playdate at Keith High School and were quickly reminded what it feels like to lose. The Bears fell in their opening game of the playdate to Demopolis 29-28 and although the game doesn’t count, it was a reminder of the work they’ll have to put in to repeat.

“Just because we did make it this year and won the championship, that season is over,” said Bears head coach Cecil Williams. “We’ve got to get ready for the next year. The summer competition is good because it doesn’t give them a chance to relax.”

The Bears had their chances in the final minutes. Shatavia Moore made a shot through contact with 1:42 remaining to tie the game 27-27 but couldn’t make the ensuing free throw to give Keith the lead.

On the next Tigers possession, Demopolis rebounded a miss and laid the ball up to take the lead for good.

Keith missed three free throws in the final minute and didn’t have enough team fouls to send Demopolis to the free throw line.

Despite the loss, there were bright spots for the Bears.

“Everybody improved in areas where they were weak,” Williams said. “That seems like a big advantage where we can substitute more people this year. Last year, I only substituted maybe two. This year it may be possible for me to have a good four or good five [off the bench].”

If that’s the case, it may be bad news for the rest of 1A. With leading scorers Winchester, Pettway and Moore returning, Keith will be among the favorites to claim the championship during the 2015-2016 school year.

Keith bounced back in its second game with a win over Sispey Valley.

Signs of last year’s championship were all around the school Monday. A championship banner was in front of the gym and even Williams was wearing Keith’s “Birmingham Bound” T-shirt from the previous year, which was purchased to commemorate the team making the state finals in Birmingham.

However, he said it’s time to move on. Williams said he reminds his players every day to focus on this year and not what they accomplished last season.

“Every day at practice we remind them never to lose sight of what we’re doing and don’t let that win take your head and give you the big head about it,” Williams said. “You’ve got to start over. That season is over. It’s in the books.”

There may be one last official look back at last season at some point soon. The Bears are expecting their championship rings to be delivered any time now.

Outside of that, Williams said it’s full speed ahead.

“We want to look forward to the future,” he said. “We’re proud of what we did, but we want to try to do it again.”