Keith moving past opening loss to Selma at buzzer 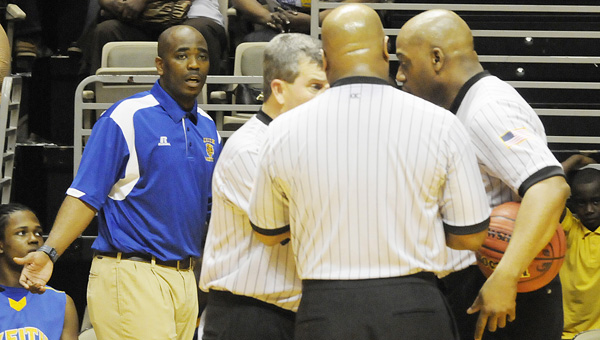 Keith boys basketball coach Tommy Tisdale waits for a call in a game last season. Tisdale and the Bears lost their season opener to county rival Selma Friday night on a buzzer beater but will look to bounce back Tuesday against R.C. Hatch.–File Photo

Selma stunned Keith 61-60 in both team’s opening game Friday night in Orrville, as Quentavious Davis nailed a three-pointer at the buzzer. Keith head coach Tommy Tisdale said he told his guys to forget about it the second the shot went in.

“I felt Friday night in spots, we got outhustled,” Tisdale said. “That wasn’t the first time we’ve lost to Selma, but that was probably their first time ever outhustling us. I think in spots we got cute and got relaxed because we did have control of the game the majority of the second half.”

With around three minutes left to play, Keith had a double-digit lead, but missed free throws, turnovers and big shots from the Saints dwindled the lead down quickly.

A couple of years ago, Tisdale said the Bears were on the winning end of a last second shot to defeat the Saints and he realizes that those kind of things typically go in cycles. When his team watched film on the game Sunday, Tisdale told them to move past it as quickly as possible.

“We put that game behind us when that shot when through the [basket],” Tisdale said. “When the horn goes off you cannot do anything about that. Now you worry about your next game and your next challenge. “

The Bears’ brand of basketball is based on toughness, a lot of depth, and winning hustle plays. Tisdale said Friday night he felt like his team got outworked at times, and he challenged them never to let that happen again.

“I challenged them not to get outhustled again,” Tisdale said. “You may get outplayed but nobody should put out more effort on the court than you. Effort is all we worked on Sunday night.”

The Bears play their next game Tuesday at R.C. Hatch before returning to Orrville to take on Wilcox Central Friday.

Kendrick, Page get over 800 votes to win Hoopla cover