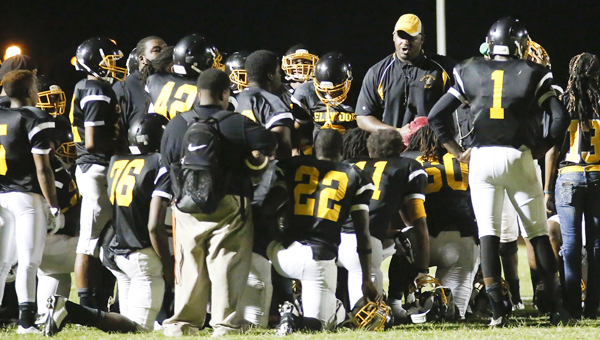 Ellwood Christian head coach Eric Martinear talks to his team following a game earlier this season. The Eagles will take on Billingsley in the second round of the AHSAA’s 1A playoffs Friday. –File Photo

It has been quite the first year for Ellwood Christian head coach Eric Martinear. He’s already led the Eagles to their first playoff win and Friday night he’ll lead Ellwood against Billingsley in the school’s first playoff home game.

The Eagles have won two straight games, both on the road against teams they had never defeated before and Friday night they face a Billingsley team that defeated them 38-12 last season. The Bears have won 15 of their last 18 games overall, including eight of their ten last season.

“We’ve got a bunch of a seniors on our team and these guys are locked in,” Martinear said. “We’re just going to try to take it as far as they can go.”

The Eagles may have their hands full Friday night against the spread-offense based Bears, whose only two losses of the season came to undefeated Maplesville and undefeated Gordo. All but one of Billingsley’s eight victories were by 18 points or more.

Like last week when Ellwood faced off against J.U. Blacksher, Martinear is expecting to see a team that offensively reminds him a lot of his own team.

“They do similar type stuff as we do on offense,” Martinear said. “They go hurry up and go off wristbands. They are high tempo just like us.”

The teams have only played two common opponents. Ellwood Christian lost to Maplesville 69-16, while Billingsley lost its opener against the Red Devils 54-0. The Bears defeated Verbena 34-14 Sept. 12, but Verbena got the best of the Eagles 56-28.

The Eagles are treating the matchup like an away game, since Ellwood is 4-2 on the road this year and just 1-4 at home.

But at the same time, Martinear said he knows a big crowd at Memorial Stadium Friday could be a big boost for his team.

The game is set to start at 7 p.m. Friday night.

Players for the Bears wave at Memorial Stadium earlier this season. Soon the youth football season will be over, as... read more