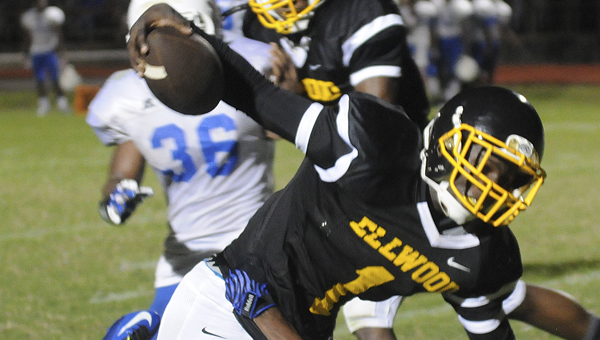 Ellwood Christian quarterback Jalen Furlow reaches for a first down in a game earlier this season versus Akron. The Eagles will take on J.U. Blacksher in a game Friday night.–File Photo

At Ellwood Christian’s first football practice of the season, head coach Eric Martinear put his team through a rigorous conditioning test. The Eagles had to run a distance — 12 to 15 laps — in a certain period of time to pass.

With the hot sun showing no mercy, many Eagles’ players were bent over with their head between their knees gasping for air.

“Every day we were out here running,” Eagles senior offensive lineman Chris Caffey said. “We had to do twelve laps in fifteen minutes. I didn’t think I was going to make it. It was hard.”

It ended up being exactly what the Eagles needed. Ellwood made the Alabama High School Athletic Association playoffs for the second time in school history and will play at J.U. Blacksher Friday night.

It’s clear to Eagles’ seniors that all of their offseason work is paying off.

“With [our old coach], we would probably run like 10 sprints or something like that,” said senior Marqueith Gullett. “With coach Martinear, we keep going until he’s tired.”

Martinear, in his first year at the school, took over a program that lost its last seven games in 2013, so he knew he needed to instill toughness. The Eagles have shown some of that this year, coming from behind for wins over Francis Marion, A.L. Johnson and Keith.

“It all starts with strength and conditioning,” Martinear said. “When I was coming out of high school that was something we did, so I wanted to implement that from a mental state of mind. Those guys, they actually did it.”

Martinear said his goal was to make sure his team was disciplined on and off the field. He’d heard of discipline issues when he first took over, but said he’s had no such problems this year.

“The main thing I saw was discipline,” Martinear said. “When I got here, interviewing and seeing some of the kids walking around and seeing how the school was, I knew I had to put my stamp on discipline.”

The Eagles have been through a tumultuous season. Ellwood’s first loss came from a forfeit to Sunshine after a computing error caused the Eagles’ entire roster to be ineligible.

Ellwood has also suffered blowout losses to Linden, Maplesville and Verbena, but bounced back with a win over A.L. Johnson  two weeks ago with the season on the line.