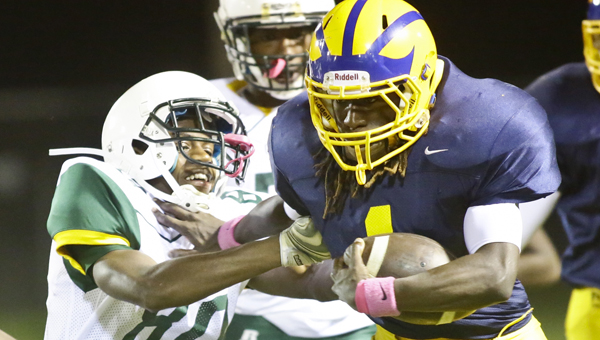 ORRVILLE — Although playoffs are not in Keith’s future, the Bears did give their seniors a win in their final game.

Keith (3-7) came out to play Friday night, dominating Central Hayneville (2-7) on both sides of the ball.

Domonique Jones had a great night for the Bears, running for four touchdowns.

“He’s one of the best around as far as his ability to just hit the hole hard and get open,” Keith head coach Harry Crum said of Jones. “He’s just a sophomore, and we’re looking for big things out of him in the future.”

Jones scored on the opening drive, running the ball for a 60-yard touchdown. Lamar Crumpton would then make the two-point conversion putting the Bears up 8-0 with 10:59 left in the first.

“We were able to establish the run early, and that’s what we do — we run the ball,” Crum said.

President Hasberry intercepted a pass on Central’s first drive giving the ball back to Keith.

The Bears would fumble the ball with Central recovering, but less than a minute later Keith would recover a Lions’ fumble.

Early in the second quarter Jones would run for another touchdown, bringing the score to 14-0.

Keith would attempt an onside kick, and Devontae Jones would recover for the Bears.

The Bears would go on to score again with Domonique Jones running for a 45-yard touchdown run to make it 20-0 with 11:26 left in the second quarter.

“We didn’t come to play football,” said James Bibb, Hayneville head coach. “[I’m] just really disappointed in the effort our guys put forward. We’re a much better team than what we [showed] tonight.”

Central would finally answer the Bears, when Ladarious Thicklin scored a touchdown and they completed a two-point conversion, making the score 20-8.

Keith would get their final score of the night before the half when Domonique Jones ran the ball 27 yards for his fourth touchdown of the night.

The score would be 26-8 at the half, after Deanthony Griffin intercepted a pass for the Bears, keeping Central from scoring late in the second quarter.

Keith couldn’t get anything going on offense in the second half, but its defense continued making stops.

Central started off the second half with the ball, but would turn it over early when Crumpton intercepted a pass.

The only points in the second half would come from Marcus Mitchell when he ran for a Central touchdown, bringing the final score to 26-14.

“Keith just outplayed us,” Bibb said. “They executed better. We didn’t execute on either side of the ball.”

Central tried to get something going late in the third and in the fourth, but would throw two interceptions to a Keith defense that was dominant all night.

“I’ve enjoyed this season. It’s disappointing that we didn’t make it to the playoffs … but it was a good year,” Crum said. “It was a learning experience.”