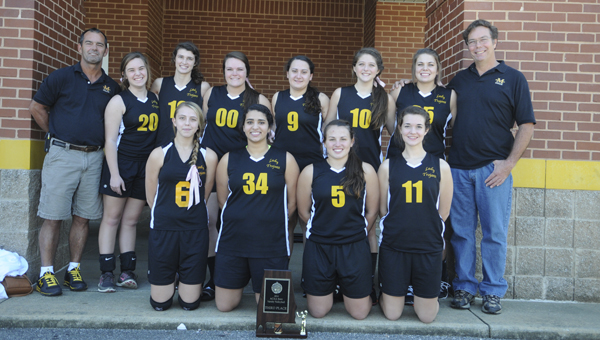 Meadowview Christian left Saturday’s state volleyball tournament with a trophy, but not the one the Lady Trojans were seeking.

After losses to New Life Christian and Tuscaloosa Christian, Meadowview had to settle for third place in the Alabama Christian Athletic Association’s state volleyball championship at Oxford High School. For a team that entered Saturday with only one loss all season — all the way back on Aug. 19 — it was a tough way to end a season in the school’s first year in the ACAA.

“I’m exceptionally proud of them,” Meadowview Christian head coach Tim Burton said. “I told them in the locker room that it was great to get here and finish third in a new association we had never been in.”

Burton said all season that the team, led by a strong group of seniors, seemed to coach itself at times. With strong play all the way around, the team seemed prepared to make school history. Instead, the Lady Trojans first back to back losses of the season could not have come at a worse time.

“We were making a lot of errors on our side and we were not really communicating as much as we usually do,” said Meadowview senior Claudia Kendrick.

The Lady Trojans started Saturday guaranteed of at least third place in the tournament and needed only two more victories to claim the school’s first varsity volleyball championship.

In their first match they met a familiar foe in New Life, the team that had handed the Lady Trojans their only defeat of the season before Saturday. New Life, who went on to win the state championship, once again got the best of the Trojans, sending Meadowview to the loser’s bracket.

The task at hand didn’t get much easier for the Lady Trojans. Meadowview had already defeated Tuscaloosa once in the first round of the tournament, but the three time defending state champions dished out some revenge in the second matchup. Tuscaloosa went on an 11-1 run to win the first set 25-20 and Meadowview took set two by the same score. In the tiebreaker set, Tuscaloosa won 15-10 to advance to the state championship.

“We wanted it so bad,” said Meadowview senior Emily Dennis. “I don’t even have words to say how bad we wanted it. We wanted our actions to show it, but sometimes it just doesn’t fall that way.”

Burton said the Trojans certainly didn’t lack for effort Saturday. Actually, he thinks his team may have been trying too hard.

“I think the tighter [the match] got closer to the end, the nerves set in a little bit,” Burton said. “We weren’t lacking for hustle. Girls tried to make plays that normally someone else would make because they were trying to make a play. Those kind of things can mess up a volleyball game.”