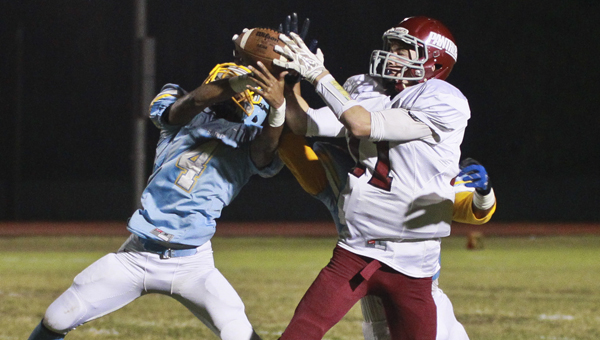 Selma’s Devin Gary fights for a pass with a Brookwood player during a game earlier this season. Selma can clinch back-to-back playoff berths win a win Friday over Northridge.–File Photo

It couldn’t be a simpler scenario for Selma Friday night in their road game against Northridge. Whichever team wins will qualify for the playoffs, while the loser will miss the postseason.

The Saints and Jaguars come into Friday’s game at 2-3 in Class 6A, area 4 play and the winner will clinch the fourth and final postseason spot from the area. McAdory, Hillcrest and Bessemer City — who all three swept Selma and Northridge — have already clinched postseason berths.

“Just watching them on film, they are well coached,” Miles said of Northridge. “The team that makes the least amount of mistakes will be the team to win.”

Selma has only played two true road games going into Friday’s night’s game in Tuscaloosa. The Saints lost big on the road at McAdory and won at Paul Bryant.  Every other Selma game has been at Memorial Stadium, which has served as the Saints’ home field and as a neutral site for games with Southside, Dallas County and Keith.

Northridge has been great at home this season, posting a 3-1 record.

The Jaguars only home defeat this season came to Hillcrest-Tuscaloosa.

“They are at home and it is homecoming,” Miles said. “I think the first half is going to say a whole lot about how the game turns out.”

Miles said Northridge has just as many athletes as the Saints and has more size, but plays more players on both sides of the ball than Selma does. Miles is hoping the Saints’ powerful running game can wear Northridge down.

The Saints are also well rested off of their bye week follwing a tough loss to Bessemer City.

“We have had two weeks to prepare for them, so hopefully that will be to our advantage that we’ve had some time to rest coming off a very tough, brutal loss to Bessemer City,” Miles said.

With their playoff hopes gone, the Dallas County Hornets (2-6) can still create a big splash with an upset of No. 5 ranked Demopolis  (7-1) Friday night at Memorial Stadium. The Tigers only loss this season came in their opening game of the year against Thomasville, an 18-14 defeat. Since then, Demopolis has rattled off seven consecutive wins, with all but one of those coming by double digits.

A Hornets’ win Friday would certainly open some eyes.

Keith (2-6) is done with region play and will need some help to make the postseason.

But, the Bears can also help themselves with a non-region win over Loachapoka Friday, since the fourth spot in Class 1A, region 4 could come down to a tiebreaker involving non-region victories.

The Bears also need both Ellwood Christian and Sunshine to lose this week in games against A.L. Johnson and Linden. If that happens, all three teams will tie at 2-4 overall in region play.

The tiebreaker is fairly complicated from that point on. It’s even more tricky because Sunshine did not play any non-region games, eliminating many of the tiebreakers. It looks like it could come down to tiebreaker “n”, which is the team whose defeated opponents have the most victories.

“We need to win out and pray,” Keith head coach Harry Crum said. “That’s all I can come up with. I told the guys to play every game like it’s a playoff game.”

SERIES HISTORY: Keith and Loachapoka will meet for the first time Friday.

With a win over A.L. Johnson Friday, the likely scenario is that Ellwood will end up claiming the third seed in Class 1A, region 4.

There’s a lot of scenarios in play though. If Ellwood and Sunshine win, there will be a three-way tie for the third and fourth spots in Class 1, region 4. The scenario Ellwood wants to avoid is one where Keith, Sunshine and Ellwood are tied at 2-4 in region play and a tiebreaker has to determine the final playoff spot.

Something has to give Friday night when winless Morgan Academy (0-8) takes on Hooper Academy (0-8). The Colts have lost seven of their eight games this season by double digits. Morgan has lost all eight of its games this year by 14 points or more.

Meadowview will finish its season Friday against a familiar foe in EMCA (3-4), a team that like the Trojans moved from the AISA to the ACEA this season. With the postseason not a possibility, Since Meadowview’s final scheduled game against Ezekiel was cancelled, the Trojans will try to finish their season on a high note Friday.

SERIES HISTORY: Meadowview lost to EMCA 58-12 in 2011 in the last meeting between the two schools.

Southside (3-5) is once again on the outside looking in at the postseason, but the Panthers can make waves with an upset of W.S. Neal.

The Eagles (5-2) have already qualified for the postseason and could still claim the second seed in Class 4A, region 1 if things fall their way.

Southside still has hopes of finishing .500 on the season, something the Panthers have not accomplished since 2009.

Selma fell to Hillcrest-Tuscaloosa Tuesday in the  first round of the Class 6A, area 6 volleyball tournament. The Saints (13-3)... read more