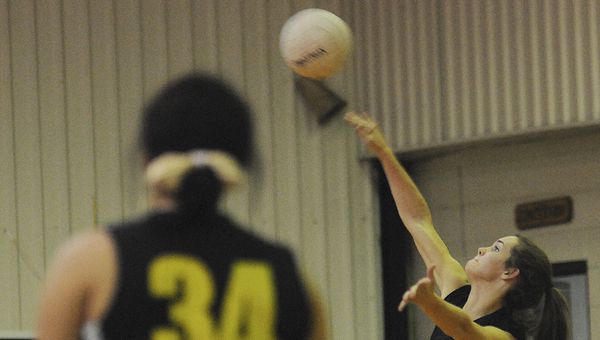 Meadowview Christian’s volleyball team advanced to the Alabama Christian Education Association’s state tournament Tuesday with a commanding sweep of Chilton Christian Academy, but there was no celebration.

There weren’t even many smiles. Meadowview’s players kept a business like demeanor as they shook hands with the players from CCA and walked to the locker room. Meadowview head coach Tim Burton said the lack of reaction was because his team knows it still hasn’t accomplished anything.

“They know they have a lot further to go,” Burton said. “They still have to go through a two day tournament and this is just one step in that quest.”

The Trojans had little trouble putting away the overmatched Patriots Tuesday, winning in straight sets 25-9, 25-5, 25-19 to advance to the state tournament in Oxford.

“I’m very proud of them for everything over the year that we’ve taught them, I see it come out,” Burton said. “That just makes you feel good as a coach, to see the girls  do what you taught them to do. They make it look easy sometimes.”

That was certainly the case Tuesday in a match that was one-sided from the start. Meadowview jumped out to an 11-5 lead in the opening set and rolled. The second set was less competitive, as the Trojans jumped out to 8-0 and 16-1 leads.

“My starters played the first two sets and the first one looked like it was going to get close,” Burton said. “Then everybody warmed up. They did what they were supposed to do. I was impressed.”

The Trojans have not lost a match since Aug. 19 against New Life Christian, a span of 64 days. Meadowview has never won a varsity state volleyball championship, but many of the same players on this year’s varsity were on the school’s 2011 junior varsity state championship squad.

“They have got their minds set on it,” Burton said of his team’s goal to win the state title. “You could go in there and ask any of them if they were going to lose and they would tell you no.”

Meadowview will face off against Lindsay Lane Friday 2:30 p.m. in Oxford in the quarterfinal round of the double elimination state tournament. Win or lose, the Trojans will play again Friday. The tournament will continue Saturday, where a state champion will be crowned. Lindsay Lane has a 10-0 area and region record, Burton said. He said he won’t have to fire up his team before Friday’s matches, because his team already knows what it needs to do to accomplish its goals.

“I’m not really going to tell them anything,” Burton said. “They already know. They’ve been there. They’ve been in tournaments and they know they have to win.”