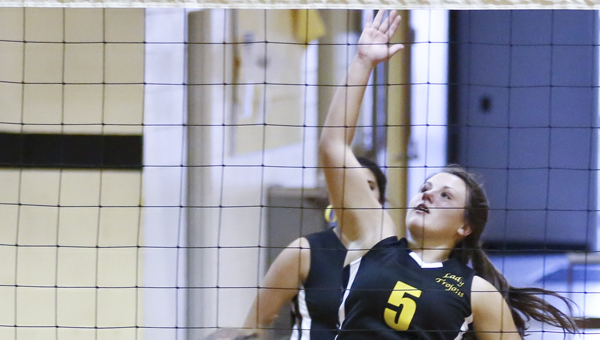 Mggie Tipton spikes the ball against Cahawba. Meadowview defeated Cahawba Christian Academy earlier this season. The Trojans will take on Chilton Christian Tuesday in a sub-state game, where the winner will advance to Friday’s state tournament in Oxford. –File Photo

It’s pretty clear that the Meadowview Christian volleyball team has made winning a habit. The Trojans have not lost a match since Aug. 19 against New Life Christian, which is Meadowview’s only loss of the year.

“They have got to where they basically play by themselves,” Meadowview Christian head coach Tim Burton said. “I saw some plays in the Tuscaloosa game that coach Mark [Mott] and I have coached, but never really drilled into them. They made some plays at the net that impressed me.”

On Tuesday, Meadowview will try to keep its winning streak going at home in a sub-state match against Chilton Christian Academy. The Trojans defeated Chilton 25-7, 25-9, 25-12 in a match in August at home.

“The key is just playing ball control,” Burton said. “If they play like they did the last couple of games, especially the one against Tuscaloosa, I think they will be fine. They stayed in it and never got down and even lost the first one against Tuscaloosa and came back and won three straight.”

Burton is not sure how many games in a row Meadowview has won going into Monday’s match, but based on the Trojans’ schedule it is eleven consecutive.

He’s not really surprised either.

Burton coached most of these same players when they won the 2011 junior varsity state championship, so he knows this team can handle the pressure.

“They’ve played in a state championship and plus we went to state last year,” Burton said.

Burton said he does not know of any varsity state volleyball championship that Meadowview has won. The Trojans would like to change that this year.

If the Trojans win Tuesday, they will face Lindsay Lane Christian Academy Friday in the first round of the state tournament in Oxford.

While the varsity is getting its postseason going, the Trojans’ junior varsity saw its season come to an end Saturday.

The Trojans JV lost two of their three matches in Saturday’s south regional tournament and was eliminated.

The Lady Trojans JV finished second in their area during the regular season.

Dallas County will look to advance to the 5A regional tournament by finishing first or second in the Class 5, area 6 tournament Tuesday in Demopolis.

The Hornets will face Sumter Central at 4:15 p.m. and if they win, will play the winner of Demopolis and Wilcox Central for the title.

The area 4 tournamnet was in Millry. The area 5 tournament was held at Billingsley.

Battle back in Selma for QB club