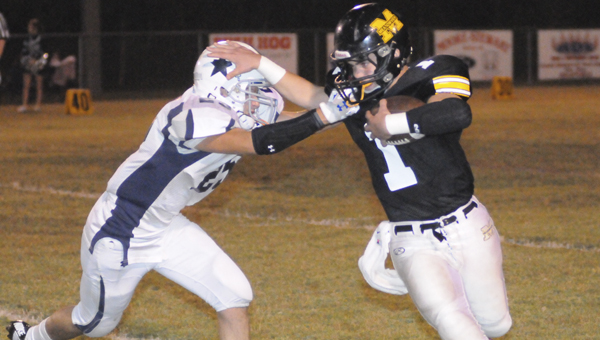 The Freedom Academy Cowboys rode in to town and rolled up 511 rushing yards in route to a 54-0 win over Meadowview Christian School, dropping the Trojans to 2-6 on the year.

Meadowview looked to strike early in the game after turning it over on downs when nose guard Dakota Sanders stripped the ball from Freedom’s Cam Story giving the Trojans the ball near mid-field. However, Meadowview couldn’t capitalize on the turnover going three and out and punting to the Cowboys.

Freedom got on track on the next possession, mounting a six-play drive punctuated by a 42-yard touchdown run by Story. The 2-point try failed putting Freedom up 6-0.

Following another three and out by the Trojans, Sanders punted and pinned the Cowboys (4-2) deep in their own territory, but after five straight running plays that gained 53-yards, Aaron Gokmen raced 45-yards for a TD. The two-point conversion put the Cowboys up 14-0.

Another Meadowview three and out led to a Freedom 7-play, 85-yard drive capped by Jonny Krzyminski’s 5-yard TD run. The PAT failed and the Cowboys were up 20-0. The Cowboys added two more TDs and led going into the half, 32-0.

“We just got beat by a better team that was stronger than us and more physical than us,” said Trojan head coach Lebo Jones. “They were running off tackle and pulling guards and we just couldn’t stop them.  We got outcoached and outplayed.”

Meadowview put together a good drive coming out of the half moving the ball 37-yards before a fumbled pitch gave Freedom the ball. Meadowview held on defense, but wound up punting the ball back to Freedom.

“I thought we played better the second half, but we just couldn’t put a drive together,” Jones said, adding that he thought Shelby York played well on defense and Justin McGuire played well on offense.

J.T. Hyche rushed for 216 yards and two touchdowns as the American Christian Academy Patriots celebrated homecoming with a 45-22... read more