Dallas Co. comes from behind to defeat Maplesville 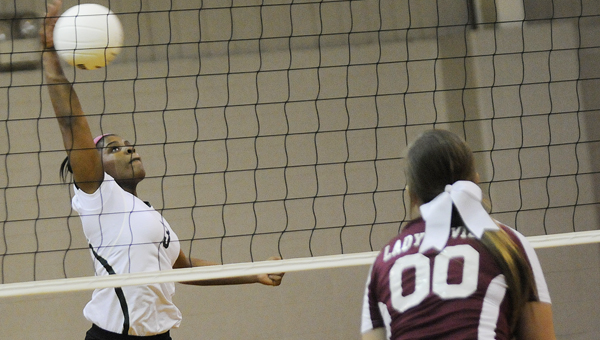 PLANTERSVILLE — Dallas County showed some fight Tuesday night as the Hornets rallied past Maplesville in a five set match where momentum seemed to swap with the success or fail of a single play.

“It definitely motivates the girls and it lets them recognize that when they work hard the end result — although it may not be a win — is success,” Moore said. “We just have to keep working hard and keep believing in ourselves.”

The Hornets seemed to believe Tuesday.

After an opening set that it completely dominated, Dallas County jumped out to a commanding 7-1 lead in the second set.

Then, the Hornets’ communication disappeared and Maplesville showed its toughness, scoring 24 of the next 25 points to steamroll Dallas County to take the set.

“There was no communication and lack of movement on the floor,” Moore said. “There was no leadership shown as well.”

Moore called a timeout, but even that couldn’t slow the Red Devils. Maplesville carried its momentum into the third set, taking a commanding lead early and hanging on for a 25-18 win.

“Here again with this group, they are trying to figure out who they are,” Moore said. “They get along well. They have that connection, but they are still trying to figure each out as far as playing on the floor.”

Dallas County might have found the connection it was looking for in the fourth set. The Hornets took back the momentum, behind a small but loud crowd and broke free of a 5-5 tie. Alexis Goodwin and Jamerah Smith seemed to be everywhere, making play after play and leading the charge as Dallas County won the final eight points of the set for a 25-11 win.

With the momentum clearly on its side, Dallas County rolled through the final set without much difficulty.

After trailing 2-1 early, Dallas County won the last 14 points of the set, led by Tori Hatfield who had three aces.

“Once they realized they could do this, they all rallied together, and played together,” Moore said.

Dallas County only has three matches left during the regular season. Moore is hoping Tuesday’s win is the kind of victory that can propel her team to make a deep postseason run.

“We still have two area games to play with Sumter Central on Thursday and Wilcox on Monday,” Moore said. “We are hoping this win tonight will carry into Thursday and carry into Monday but we will see.”