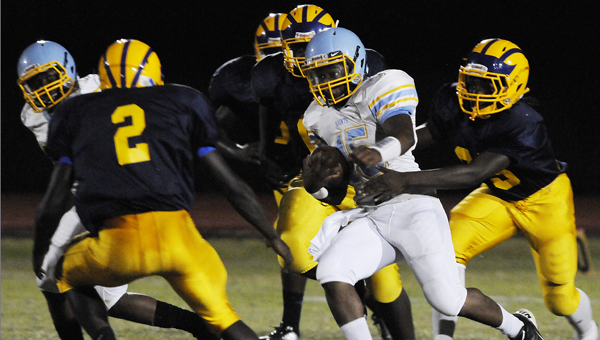 Selma’s Taqwillis Chappell runs the ball against Keith in Friday night’s game at Memorial Stadium. The Saints rolled to a 52-8 victory over their county rivals, using three non-offensive touchdowns to pull away. –Daniel Evans

Selma jumped on Keith from the opening kickoff and routed their county rivals 52-8 Friday night at Memorial Stadium.

Rashawn Reeves ran the opening kickoff back 87-yards for a touchdown to set the tone on a  night where Saints’ special teams ended up being one of the key factors in the game.

“Special teams played a big part,” Selma head coach Leroy Miles said. “Especially when we have a totally different group of 11 playing on our special teams that are fresh and when we are playing a 1A school and he doesn’t have the numbers we have, it gives us the advantage.”

Selma, a 6A school that rosters over 70 kids, definitely appeared to be the fresher team Friday against Keith, a 1A school already at a depth disadvantage hat was without six starters due to injuries.

“They had us in disarray,” Keith head coach Harry Crum said. “You can’t give the opening kickoff up for a touchdown. We did that against Maplesville and we did it tonight.”

Selma also took advantage of poor punting by the Bears. On one occasion in the second quarter, a Keith punt from its own end zone went straight into the air and into the hands of Herschell Brown Jr., who took it 4-yards for a score.

“We had a young punter and I can’t get on him because he did the best he could, but he had his toe kind of backwards and we had a bad punt and they ran it back for a touchdown,“ Crum said.

For Selma, Friday’s game was the kind of all-around performance the Saints needed after the program’s first back-to-back losses since 2012. Starting quarterback Jesse Boggs tore his ACL last week and is out for the season and suspensions the last two weeks had driven some division into the team, Miles said.

“This win puts us back as a family,” Miles said. “Last week tore us apart a little bit with all the adversity we have been going through with coaches being suspended and coming back… Winning always heals things and it’s good to be back in the win column.”

Everything seemed to go right Friday for Selma. On their first possession of the game, Brandon Hatcher scored his first of three rushing touchdowns with 7:51 remaining in the opening quarter to put the Saints up 14-0. Hatcher ran it in again with 1:28 left in the first, giving Selma a commanding 20-0 lead.

Kerry Ford scored the next touchdown of the night for the Saints on a 14-yard run with 1:14 left in the second quarter to make it 40-0.  The teams went to halftime with the game at that score.

Keith started the second half with a time consuming, nearly six-minute drive, but it ended with Selma’s third non-offensive touchdown of the evening. Keith quarterback Brian Crum threw an interception that was returned by Michael Griffin 68-yards for a touchdown to put Selma up 46-0.

“I think the receiver was turned the wrong way and Brian threw it outside,” Crum said. “That’s three scores right there just really quick that broke our back.”

Keith found the end zone for the first time with 4:47 remaining in the fourth quarter, pulling within 46-8 on a 60-yard run by Domonique Jones.  Selma added its final touchdown of the night on a 21-yard run by James Hampton with 37.1 seconds left to play. The Saints will host Brookwood next week on homecoming, while Keith will play at A.L. Johnson.