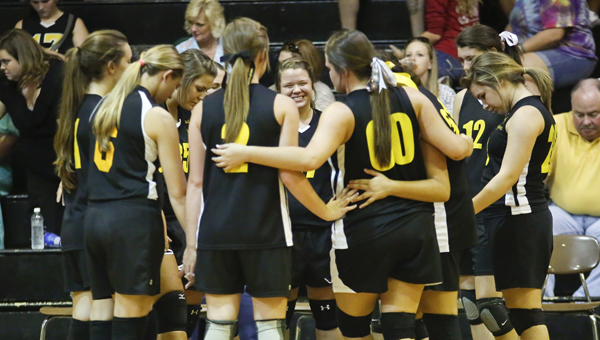 The Lady Trojans (10-1) steamrolled over Cahawba Christian 25-6, 25-15, 25-12 to continue a hot streak that dates back to their only loss of the year, which came to New Life Christian on Aug. 19.  Meadowview head coach Tim Burton has credited the Trojans’ serving during the winning streak and again, on Tuesday, he was impressed with his team’s ability to consistently get the ball over the net.

“Our serving, as I’ve said before, was pretty good today,” Burton said. “I had one girl get back there and just murdered it.”

Burton was referring to Claudia Kendrick, who served for 14 straight points in a tone-setting first set that established control of the match.

“That many in a row was the kicker,” Burton said. “If she can get over five or six in a row, she’s really done something.”

Burton tries to play his entire 12-player bench in each game and Tuesday was no different. He was able to play all 12 girls as the Trojans once again showed that depth is one of their biggest strengths.

“I try to get everybody in every night if possible,” Burton said. “As far as playing ability, they can all just about play. The six I start just seem to play better together.”

The Trojans’ bench struggled when it first entered the game, which led to a sloppy second set, Burton said.

Meadowview kept it together and pulled away after Cahawba had pulled within 17-14. The Trojans won eight of the game’s last nine points to take a 2-0 lead in the match.

The third and final set was the most competitive of the match. Cahawba led at three different times and the set was tied 10-10 at one point, but Meadowview put it away by winning 15 of the last 17 points.

Kendrick’s serving prowess appeared again, as she scored eight straight points to put the Trojans on the brink of the victory.

Cahawba’s Anilyia Lilly served into the net for the match’s final point, giving Meadowview the win.

The Trojans next game will be next Tuesday at Brooklane on Sept. 30 at 4 p.m.

Hornets’ defensive gameplan on the sideline during their game against the Southeastern. –Alaina Denean Concordia College Alabama had shown improvement... read more