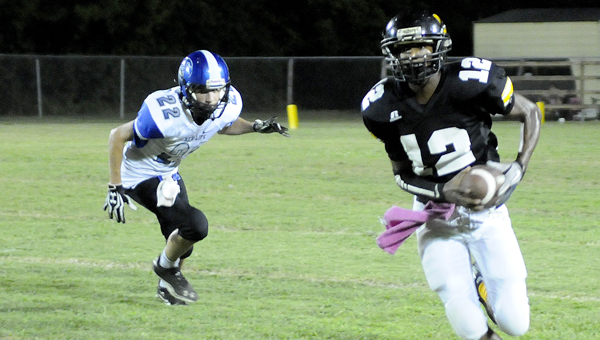 Meadowview Christian picked up its second win of the season Friday night, dominating on both the offensive and defensive side of the ball, in its 40-22 victory over New Life Christian Academy.

The win already gives the Trojans one more win then they had all of last season, and gives them an all-important region win after the third week of the season.

“I felt that we played the absolute best game we have played all season, on both sides,” Meadowview Christian head coach Lebo Jones said. “On defense, this was our best game. We were able to control the game for much of the first half, which helped us build a big halftime lead.”

The 40-point output Friday night comes on the heels of a 68-point total last week, evidence that something has clicked for the Trojans.

“We changed some of the ways we practiced before last week’s game and did the same thing this week. It appears it is working,” Jones said. “In the first game of the year, we had some bad attitudes and some selfishness. The past two weeks though, we have played as a team, as one unit. And, it’s showing on the field.”

What is also showing on the field is just how good of an athlete the Trojans have in senior tailback C.J. Grimes.

Last week in the Trojans’ 68-34 win over Evangel, Grimes scored two touchdowns on offense and two more on defense. This Friday night was even more impressive.

Grimes scored four touchdowns on offense and another on defense in only three quarters before missing the rest of the game with cramps.

Grimes scored on touchdown runs of 37, 18, 84 and 64 yards. And, those don’t include two long touchdown runs that were called back because of Meadowview penalties.

On defense, Grimes returned an interception 35 yards in the second quarter that helped give the Trojans an insurmountable halftime lead.

“He is an amazing athlete and has only been playing football for two years,” Jones said. “It is scary to think what he could be had he played four of five years.”

Grimes was the leading rusher in the game, running for 273 yards on 10 carries.

“Alan was in the backfield a lot tonight. He’s a great player and leader,” Jones said. “He is someone who has played for me for five years and really done a great job.”

Meadowview will look to extend its winning streak to three games, when it hosts Wiregrass Christian next week.