Ellwood pulls away from Akron in second half 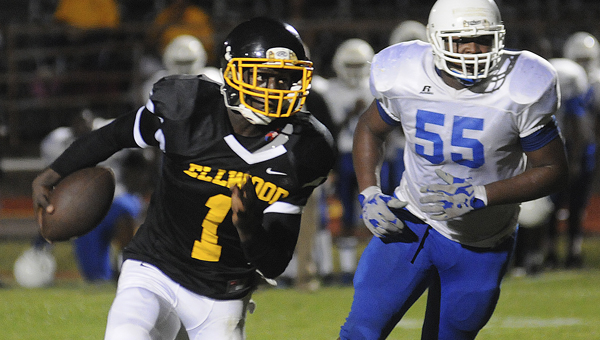 Ellwood Christian quarterback Jalen Furlow runs around the end during the Eagles’ 33-20 victory over Akron Friday night at Memorial Stadium. Furlow threw for three touchdowns and ran for another score.–Daniel Evans

Both teams had numerous turnovers, and penalty flags were thrown left and right all night, but the Eagles’ unblemished record survived thanks to a fantastic offensive performance and an opportunistic defense that took advantage of Akron mistakes.

“We have a short week next week so we had to get this game,” said Ellwood Christian head coach Eric Martinear. “It was a region game so it’s real big for us. We started out slow but got a little momentum and kept fighting.”

Furlow threw three long touchdown passes — all to J’miere Solomon — but had to overcome a first quarter mistake that gave Akron momentum. Furlow threw an interception that was returned by Akron’s Dequan Bryant 25-yards to get the Rams within 7-6 after a failed two-point conversion.

After holding the Eagles to a three-and-out, Akron’s Johnny Tubbs ran a punt back 47 yards to the Ellwood 3-yard line. Tubbs cashed it in on the next play, giving Akron a 12-7 lead with 1:05 left in the first quarter.

Furlow eventually found his groove, as he threw a 44-yard pass to Michael Lewis to set the Eagles’ up at the Akron 3-yard line. A few plays later, Furlow ran it in from 1-yard out to put the Eagles up 13-12 with just a few minutes remaining in the half.

The Eagles opened up the second half with a 43-yard bomb from Furlow to Solomon to help Ellwood extend its lead to 19-12. Another touchdown pass, this one for 41 yards, gave Ellwood a 25-12 lead later in the quarter.

The final Eagles’ score was run in by Michael Lewis on a 1-yard run, but even that play was set up by a long pass from Furlow, who finished the night 6 of 13 for 193 yards and three touchdowns. He also ran for 79 yards.

“The guy is a heck of a player,” Martinear said of Furlow. “He did what he was supposed to do tonight.”

One thing was apparent throughout the night — the Eagles were going to test the Rams’ defense over the top.

“We are trying to get our passing game where we can scare people,” Martinear said. “Right now we are scaring ourselves because of dropped passes. We just need to focus.”

It was a big night for Solomon — who dropped two potential touchdown passes of his own — but he still scored three times. He showed his all-around ability after being named one of the Alabama Sports Writers Association’s finalists for defensive player of the week two weeks ago. He caught three touchdowns from Furlow and had 132 yards receiving and also intercepted two passes in on the night.

“He’s a game changer,” Martinear said of Solomon. “The guy is just unbelievable . Every time he comes up with plays like that unexpected. He’s just one of those guys.”

It wasn’t a great night for Akron, who stayed winless with the loss.

“I’m proud of my team for coming in here and facing overwhelming odds,” said Akron head coach Barry Colburn. “We are looking forward to coming back next week and facing A.L. Johnson.”

Akron’s LaDarius Hayes scored from 15-yards out to pull his team within 33-20 late in the game, but that was as close as the Rams would get.