Ellwood Eagles are well-rested for showdown with Akron 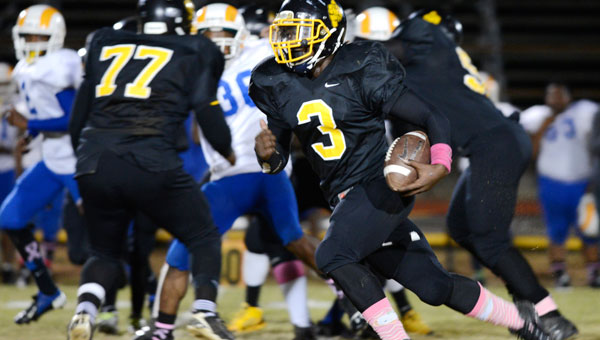 Ellwood Christian Academy running back Rayford Mitchell runs in last season’s game against Akron. If the Eagles’ are going to start the season 2-0, they will likely need a big effort from their running game. (File Photo | Times-Journal)

Ellwood Christian head coach Eric Martinear remained confident throughout the off-season that his Eagles’ could surprise some people this season.

The Eagles defeated Francis Marion 48-38 two weeks ago before resting during a bye week. A victory over a Rams’ team that has now lost eight of its last ten games isn’t going to open many eyes, but Martinear hopes it’s the first building block for a program that he believes has a lot of potential.

Ellwood’s second test will come Friday when the Eagles’ host Akron, a team the Eagles’ will likely need to finish ahead of to make a run at the postseason.

Eagles’ quarterback Jalen Furlow ran wild against Francis Marion’s defense two weeks ago, totaling 196 yards on the ground three touchdowns. He also threw for another score. Martinear said the game plan will once again heavily focus on Furlow, but he wants some of the other Eagles’ players to step up and take some of the pressure off of his senior quarterback.

“We want to be able to spread the ball out,” Martinear said. “We have some guys that can make plays — J’miere Solomon, Rayford Mitchell, Marqueith Gullet. We need to realize we are a team and not one man and once we realize that we will be fine.”

While the Eagles will enter Friday’s game with a lot of momentum, Akron will be trying to turn its season around.

The Rams defense hasn’t been good, allowing 47 and 49 points, and the offense hasn’t been much better. Akron has scored only 20 points all season and is likely to need more than that to beat the well-rested Eagles, who should have plenty of energy coming off of a bye and playing their home .

“It helped tremendously,” Martinear said of the bye week. “We had some guys banged up and guys got healthy.”

4 PLAYER TO WATCH: Ellwood Christian quarterback Jalen Furlow will play after suffering a concussion that forced him to leave the Eagles’ 48-38 win over Francis Marion two weeks ago. Furlow totaled four touchdowns in that game, rushing for 192 yards and three scores.

4 WHAT TO WATCH: The Eagles will play their first home contest of the season and will look to win consecutive games for the first time since Sept. 13 of last year.

Southside to use Gibbs and Cole at QB versus Satsuma

Southside quarterback Khamari Gibbs has missed the first two games of the season with a hamstring injury. Gibbs will not... read more