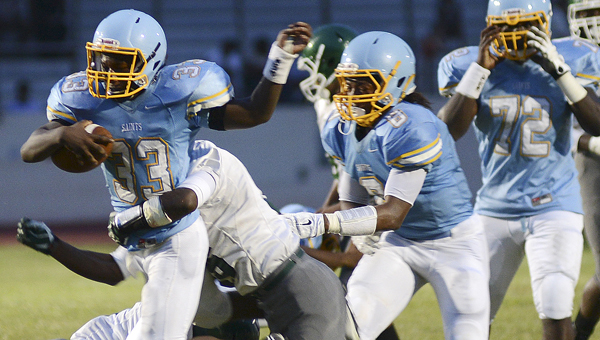 Selma running back Kerry Ford is brought down at the end of a run in the second quarter of Friday’s game against Dallas County at Memorial Stadium.–Jay Sowers

For the second consecutive week, the Selma Saints marched into Memorial Stadium Friday to take on a county rival, and again they got the result they wanted.

The Saints defeated Dallas County 28-6 behind a solid defense and steady running attack on offense.

The Hornets left the ball on the field four times, the Saints fumbled twice, and both teams collected one interception in a game largely dominated by the defenses.

“I don’t know how many turnovers they had, or how many we had, but I know that played a huge part in this game,” said Selma head coach Leroy Miles. “I know we had some short fields in the first half and were able to go up 14-0, which helped us and put [Dallas County] in a bad situation early in this game.”

On the other sideline, Dallas County head coach Marty Smith said he was proud of the effort put forth by his defensive unit.

“Defensively, our guys played their rear ends off,” Smith said. “They did everything we asked them to do and they kept us in the ball game.”

The Saints got the scoring started when quarterback Jesse Boggs found wide receiver Cyron Ellis open in the right corner of the end zone midway through the first quarter, putting Selma ahead 7-0.

After Dallas County quarterback Xavier Knight fumbled a snap on the next drive, the Saints recovered the ball in Dallas County territory and looked to add to their early lead.

However, two snaps after they got the ball at the Hornets’ 12-yard line, Boggs threw a pass which was deflected by two defenders and intercepted by Dallas County defensive back Quincy Parker.

With a chance to drive the field and even the score, the Hornets gave the ball right back to the Saints when Knight threw an interception to Selma defensive back Marquell Moorer at the 31-yard line.

Smith said his team’s inability to protect the ball and take advantage of offensive opportunities — especially when the game was within reach — was a big reason they were unable to pull out the victory.

“Offensively, we’ve got work to do,” Smith said. “We couldn’t line up correctly, couldn’t block the right people couldn’t run in the right holes, and that is coaching. It’s not the players’ fault, it’s our fault and we’ve got to correct it.”

Selma would score at the end of the first quarter on a bruising 2-yard touchdown run up the middle by running back Kendarious Merchant.

After leading 14-0 at the half, the Saints would build on that lead early in the second half with a 33-yard touchdown run by Kerry Ford to go ahead 21-0.

Dallas County’s lone score came moments later on a pass from Knight to wide reciver Micah Kennedy down the right sideline. The Hornets failed to convert on a two-pint attempt, and trailed 21-6.

After the halftime break, the Saints dominated possession of the ball by sticking to the run to chew up both yardage and precious time.

Boggs tallied the final score on a quarterback keeper up the middle from 3-yards out with just over five minutes left in the game, giving the Saints a 28-6 lead.

After the game, Miles noted the margin of victory could have been even better if his team had played a cleaner game without the penalties that negated several big gains throughout the game.

“We had some penalties that cost us on some big runs, so we are going to watch this film and evaluate those penalties,” Miles said. “I’ve said it before, but there are consequences for big-time penalties, so we will address it.”