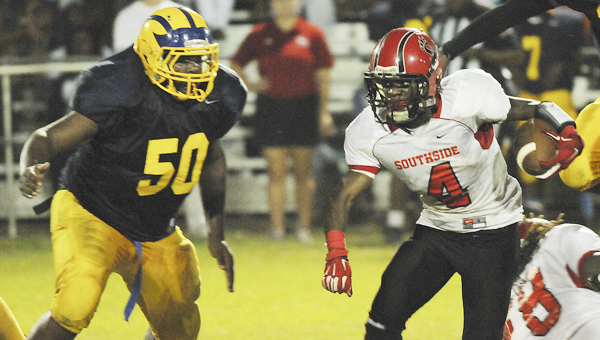 Southside HIgh School’s Jhlandius Sullivan, right, eludes a Keith defender during Friday night’s game. Sullivan scored a rushing touchdown, a receiving touchdown and had several big punt returns to lead the Panthers to a 40-12 victory over the Bears.–Daniel Evans

ORRVILLE — The stadium lights at J.V. Caldwell Memorial Stadium had a mechanical issue Friday, forcing Friday’s Keith-Southside game to start 85 minutes late. Once the lights were finally lit, the Panthers put on a show.

Southside dominated Keith 40-12 with a steady rushing attack and a bounce back performance from quarterback Scott Cole, who made his second start in a row for an injured Khamari Gibbs. Southside head coach Daniel Flowers said a win like this one — a blowout victory on the road at a county rival — is huge for the Panthers’ program.

“This is a great win,” Flowers said. “Coming off that loss to Selma last week, I was mad, but I told the guys we had to move forward. We had to worry about what was ahead of us and not what was behind us.”

Cole threw three first half touchdowns to three different receivers — Delundre Edwards, Ger’Quialius Fails and Jhlandius Sullivan — on his way to passing for 136 yards. The Panthers’ rushing game also found its groove in the second half. Damon Watts led the way with 62 rushing yards, but Flowers credited the offensive line’s performance as the key to all of Southside’s success.

“The offensive line blocked well — that was the key to the game,” Flowers said. William Bonner, Arthur Walker, Newt Young, Mitch Williams — those guys are the reason we won the ball game.”

The game nearly never got started, as the lights at the stadium were out until well after 8 p.m, pushing kickoff back over an hour.

“I guess one of the breakers had gone out, so we had to wait about an hour,” said Keith head coach Harry Crum. “They brought it in and they were able to fix it.”

Even with the lights shining down, the Bears’ offense didn’t resemble its usual self on this night. Southside held the Bears to 96 yards, and for most of the game dominated the line of scrimmage.

Keith jumped out to a 6-0 lead after a 50-yard punt return by Deanthony Griffin gave the Bears great field position. Griffin ran it in four plays later and Keith led with 4:21 remaining in the opening quarter.

Nothing seemed to go right for the Bears from that point on.

The Bears gave up a 36-yard touchdown pass from Cole to Edwards on the last play of the first quarter, which allowed Southside to knot the score at 6-6. A big punt return by Sullivan — who totaled yards on the ground, through the air and on special teams, — set the Panthers up for a second Cole touchdown pass.

This one went to Fails and gave the Panthers a 12-6 lead with 8:57 remaining in the first half.

The Bears tried to punt on their next possession, but had trouble with the snap. Southside swarmed the punter for a big loss and a change of possession.

Cole threw his third touchdown — hitting Sullivan in stride in the corner of the end zone to give the Panthers a 20-6 advantage following the game’s first successful two-point conversion try.

“I told him to worry about the things in front of him,” Flowers said of his quarterback. “I said ‘yes, people are saying you played bad last week’ but worry about what’s in front of you. Show these teams that you can win ball games and he did it. He earned my confidence in him.”

Crum was upset with his defense’s performance — especially in the secondary.

Things only got weirder from there for the Bears, who lost at home to the Panthers for the second straight season. While the Southside band was performing at halftime, the sprinkler system came on and forced Crum to run out of the locker room to turn the water off. To their credit, the Panthers’ band never missed a beat, performing like the water wasn’t a distraction at all.

“We look up and the sprinkler system popped on when the band was going,” Crum said. “… I noticed our field was greener in spots and I never knew why, but I guess the timer had been coming on. It was one of those nights.”

In the third quarter, Keith pulled within one score after Southside’s special team woes — which cost the Panthers dearly last week versus Selma — showed themselves again. A poor snap gave Jermaine Savage no chance, as the ball went soaring over his head and gave the Bears the ball at the Southside 30-yard line. A 25-yard touchdown run by Domonique Jones gave Keith life, but Watts answered with a 5-yard touchdown run of his own to put Southside in front 26-12.

With his team down big, Crum called for a fake punt on the next possession — and it appeared to work, but Southside was awarded a timeout that seemed to be called right before the snap.

Even after the timeout, Crum dialed up another fake punt but the Bears were stopped short, giving Southside the ball.

Sullivan ran it in from 28-yards out, breaking tackles and diving into the end zone to put the game out of reach with 11:22 left to play. Watts added one more touchdown, his second score of the night, with 5:33 left to help Southside score 40 points for the first time since 2010.

For the Bears, Crum said it will be back to the drawing board for the units that struggled Friday — namely the secondary and offensive line.

“We have to find out where our problem areas are on the line,” Crum said. “I thought we had solved them. Autaugaville was not as strong as Southside but we moved the ball down there at will. Maybe the guys came in sky high and thought they could do that here, but that just wasn’t happening.”

Southside hosts Satsuma next week, while Keith travels to take on Linden.

Selma running back Kerry Ford is brought down at the end of a run in the second quarter of Friday’s... read more