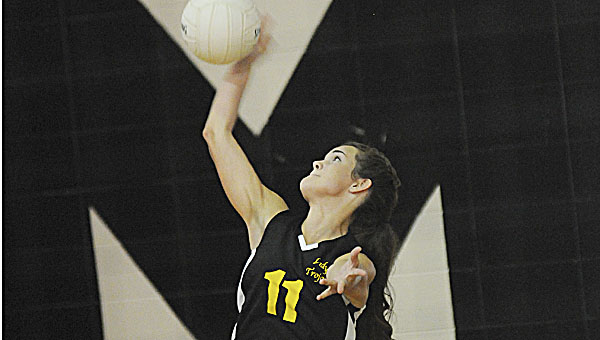 Meadowview Christian was dominant in its win over Chilton Christian Academy Thursday. Playing their home opener, the Trojans won all three sets to sweep the Patriots. Meadowview’s next game is Monday at Evangel Christian.–Daniel Evans

It’s only one game, but Meadowview Christian will have a hard time playing better than it did Thursday in its home opener versus Chilton Christian Academy.

The Trojans dominated Chilton 25-7, 25-9, 25-12 behind pinpoint serving and excellent defense.

Meadowview head coach Tim Burton said his team was relaxed and having fun, which allowed it to play to the best of its abilities.

“If they’re having fun, they are playing good,” Burton said. “I’ll take this every night.”

Meadowview only had four serves that failed to make it over the net in three games, something Burton took notice of and was extremely proud about.

The stat was even more impressive considering Thursday was the Trojans first regular season contest of the year.

Meadowview played in a tournament over the weekend in Oxford, playing seven three-set contests, but Thursday’s game was the Trojans first five-set match of the year.

“Their hitting was excellent today,” Chilton head coach Marilyn Jones said of the Trojans’ serving performance. “They were taking that corner hit every time. They were on today. That’s great for them and bad for me.”

The Trojans and Patriots met in the consolation tournament’s championship game in Oxford this weekend and Meadowview won in three sets. Burton said his team probably gained a lot of confidence from that victory, considering it was the Trojans’ first look at teams from the Alabama Christian Education Association.

“I think they gained a lot because of the experience from playing them,” Burton said. “They are a pretty good team.”

The Trojans were tested by Chilton in Saturday’s tournament, but they weren’t really tested at all Thursday. Chilton never led in a single set, and stayed behind by large margins most of the way.

Meadowview jumped out to a 9-0 lead in the opening set. Chilton scored for the first time when Claudia Kendrick’s return went into the net, but the Patriots were unable to turn that break into any momentum. Meadowview quickly regained possession on its way to a 25-7 first set victory.

The Trojans didn’t slow down from there, as Meadowview again jumped out to a 9-0 lead in the second game. Chilton had a hard time gaining possession, as Meadowview showed no early season rust in its serve/receive game.

“I had girls serve nine in a row that very seldom do that,” Burton said. “I had some of my better servers that didn’t even get a chance to get back there and try to serve it.”

Chilton didn’t allow Meadowview to jump out to a big lead in the third set, as they scored early to make the score 2-1 Trojans. Unfortunately for Chilton, that was as close as the Patriots would get all day.

Meadowview jumped out to a 13-2 lead as Christina Dabit’s serve kept possession for the Trojans. Meadowview won the game 25-12 to sweep the match.

Meadowview’s next game will be Monday at Evangel Christian.