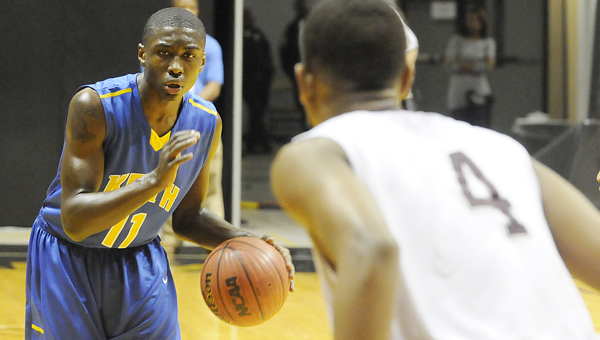 Keith’s John Pettway dribbles the ball in the Bears loss last season against St. Jude in the Central Regional at Alabama State University in Montgomery. Pettway and the Bears will play three games Friday as part of a play date being held at Selma High School and Concordia College Alabama.–File Photo

School is out for summer, but local basketball teams aren’t taking it easy.

Southside, Selma, Dallas County and Keith will all take part in a basketball play date being held Friday and Saturday at Selma High School and Concordia College Alabama.

A total of 16 boys teams and 11 girls teams will take part, with each team playing three contests.

“One good thing about it is the four local teams will not play each other because we play so much during the year,” Selma head coach Woodie Jackson said. “This gives everybody a chance to play teams from different areas and also play a different style of ball.”

While Jackson hopes to see that his team has improved since the end of last season, Dallas County is starting to put memories of last year’s Class 4A state championship in the rearview mirror. It was only weeks ago that the Hornets were celebrating the school’s first basketball title in Birmingham, but now a much different looking Hornets’ team is already working towards a new season and preparing to take the court Friday at Selma.

“It hasn’t been an issue trying to get our guys to refocus,” Dallas County head coach Willie Moore said. “They realize this is a new team with a different kind of identity than we had last year.”

Gone is UAB bound William Lee, who was named Mr. Basketball, leaving a nucleus of experienced players mixed in with several young guys. Moore plans on putting younger players in unfamiliar situations to see how they react and at this point, he’s not worried about the final result on the scoreboard.

“It’s not about us winning games during the summer,” Moore said. “It’s about us playing tough competition. I want our kids to have to be able to compete.”

Moore also understands that when a team beats the Hornets, even during the summer, it means more than it once did.

“Other people that play us are playing against last year’s team,” Moore said. “They want to beat the champion. I tell my guys they are going to get everybody’s best shot.”

Keith is also losing a star player, as Anfernee Simmons has graduated and will play at Wallace Community College Selma next year. Bears head coach Tommy Tisdale said this summer is all about getting younger guys up to speed and establishing the toughness Keith teams have shown in the past.

“With losing what we lost, of course the first thing we are looking for is an identity,” Tisdale said. “It is an opportunity for younger guys to step in and show that they are ready to play.”