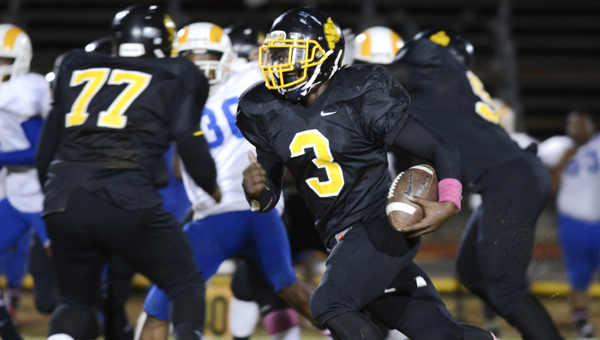 Ellwood Christian defeated J.F. Shields 12-6 Wednesday night at Memorial Stadium in the Eagles’ jamboree game, giving head coach Eric Martinear a victory in his first game on the sidelines for the Eagles.

Martinear, who was hired earlier this month to take over the Eagles’ football program, may have been biting his nails in the final seconds. Ellwood’s J’Miere Solomon caught a 35-yard touchdown pass as time expired in the game to give the Eagles a last second victory.

The win also might give the Eagles something to build on, Martinear said.

“I think the spring game can build a tremendous amount of confidence going into the summer because they’ve seen the mistakes they made but they persevered from that,” Martinear said. “They understand they can’t make those mistakes against a great team and expect to win. They learned how to play for 48 minutes yesterday.”

Last season the Eagles started 2-1 before losing their final seven games, so Martinear said the win was a big step in the right direction.

“It felt good, just because the support from the community and parents and for the kids’ morale going into the summer to pull out that win,” Martinear said.

Rayford Mitchell scored the first touchdown of the game for the Eagles, who were tied 6-6 at the half.

“Our offensive line did an excellent job,” Martinear said. “Our defense played well. We had a goal line stop in the first half and right before halftime they had the ball and were driving the field and we made stops.”

The Eagles were also without starting quarterback Jalen Furlow, who suffered a knee injury last week when he stepped on a basketball. The severity of Furlow’s injury is not yet known, but Martinear told him to take it easy and focus on the fall.

“I told him, ‘I know this is your last spring game, but you’ll get a lot more wins this upcoming season,’” Martinear said.

In Furlow’s absence, Marquieth Gullett started at quarterback for the Eagle, but he suffered a separated shoulder on the first drive of the game and did not play the rest of the way. Jalen Booker, the third string quarterback replaced Gullett and gave the Eagles some life on offense.

“He stepped up and made plays. He will be a senior next year and this is his first time putting on the pads for Ellwood. He has a future playing at the next level.”

Solomon also played quarterback for the Eagles in the game.

Martinear said there were also plenty of things the Eagles had to work on this summer. Ellwood Christian had three fumbles, including one on an interception that was fumbled right back to J.F. Shields.

“We have got to work on more strength and conditioning and teaching the guys the game so they can understand,” Martinear said. “We also have to continue believing we can win because we have the talent. We just have to get more kids out [to play football] too. That’s the biggest thing.”

Local football teams get back on the field for spring games

Southside High School quarterback Khamari Gibbs hands off to a running back in a football game last season. Gibbs and... read more