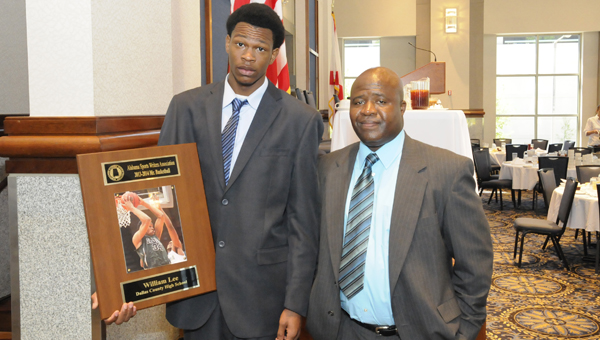 MONTGOMERY — Dallas County forward William Lee said numerous times this year that he had three goals for his senior season: win a Class 4A state championship, win the Class 4A Player of the Year, and win the Alabama Sports Writers Association’s Mr. Basketball award.

At the ASWA’s banquet Wednesday in Montgomery, Lee was named Alabama’s Mr. Basketball and became the first Dallas County High School player to win the award. Lee — a senior, who averaged 21 points and 13 rebounds per game for the Hornets this season — said he was surprised when his name was called.

“It means a lot,” Lee said. “I really don’t know what to say right now because I am still in shock that I won it. “

“I’m just thanking God that I won and praying that I don’t let it go to my head and keep working hard and keep going to the gym and lifting weights so I can improve my game at the next level,” Lee said.

In his final game as a Hornet in the Class 4A state championship game, Lee had a couple of highlight reel plays to keep Dallas County’s season alive.

Lee hit a three-pointer as time ended in regulation to tie the game and then made three free throws in overtime to lead the Hornets past J.O. Johnson 51-48.

Dallas County head coach Willie Moore, who coached Lee for four seasons, said all season that Lee was the best player in the state. Wednesday, when the vote showed that the ASWA agreed, he had more compliments for his team’s star.

“They couldn’t have picked anybody more deserving than William,” Moore said. “He embodies everything that you want a Mr. Basketball to have. When you think about the award, you think of somebody like him.”

Lee is looking forward to the next chapter of his basketball career, which will take place at UAB this fall.

Dallas County’s Quintavis Parker, above, runs in the 110-meter hurdles Tuesday during the Bobby Dolbare Invitational, finishing second with a... read more