Chips for Charity a huge hit 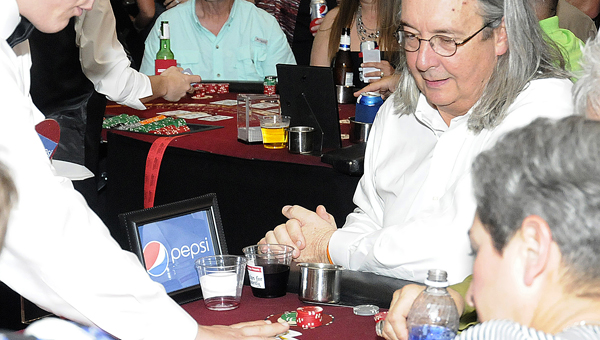 The money raised from the event will assist Wannabe Rescued, the Central Alabama Child Advocacy Center and the Selma City School’s homeless program.

Mary Susan Crovato, the Selma Charity League president, said more than 500 tickets were sold ahead of the weekend event. Crovato was appreciative of the Selma community, which once again blew her away with their giving and their involvement.

Based on early turnout, Crovato was confident this year’s event had raised more than last year’s $10,000, although the money raised had not yet been totaled.

Chips for Charity is the only current fundraiser for the Selma Charity League. At one time the league came together once every three years for the Fun with Follies fundraiser, but when the business that sponsored that event folded the league had to find a new fundraiser.

The community has responded well to the card-playing event, allowing the Charity League to continue helping out local charities.

“It’s so important for Selma’s community to support the Selma Charity League because we raise money to give back to our community and that’s why we are doing this,” Crovato said.

Guests paid $40 for food, entertainment, drinks and $1,000 play money to play with. Many couples enjoyed the slots, blackjack tables and craps tables that filled half of the floor of the old armory, while others enjoyed the live band that played music throughout the event.

Last year’s event, while successful, gave the Charity League a look at how this type of event would work, and Crovato said this year’s event ran more efficiently.

Local non-profit organizations and agencies are encouraged to petition the Charity League to be one of three supported by the annual Chips for Charity event. After receiving the petitions, Charity League members vote on the three organizations who will receive contributions.