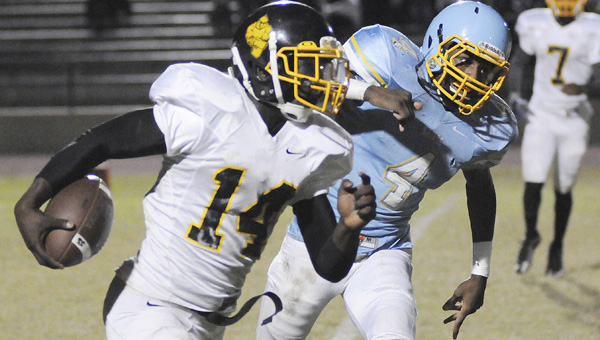 On the other end of the call was a coach from South Alabama, who offered him a football scholarship after viewing highlight tape on the linebacker.

According to Selma head coach Leroy Miles, Conn, a junior for the Saints, became the first junior in Selma High’s history to receive a football offer from a Division I University that plays at the Football Bowl Division level.

Miles said this accomplishment shows the growth of Selma’s football program, especially when it comes to strength and conditioning.

“This is a great accomplishment for Malcolm,” Miles said. “A lot of the people here at Selma High School are very impressed that we can produce that kind of caliber athlete to get an offer his junior year.“

Two of those interceptions came at Sidney Lanier and he returned one of those for a touchdown, his only score of the season.

Although Miles doesn’t have a complete count on how many tackles Conn recorded last year, he estimates the linebacker had over 90 tackles and had many more assists.

“He has got a lot of range,” Miles said. “He has speed and he is explosive when he makes tackles. I went back and looked at his highlight film and wanted to see what coach saw.”

What Miles saw was a player that made a big difference defensively for the Saints. Miles said the Greenville game was Conn’s best game of the year.

“He made a lot of players in the backfield and had an interception,” Miles said. “He just really shut them down and what that did was spark the rest of our team.”

Conn played outside and middle linebacker for the Saints last season.

Now, the school is preparing to add to its recruiting prowess.

The Jaguars play in the Sun Belt Conference and received full status in 2013, going 6-6 in their first full year playing FBS football. The South Alabama football program was started in 2009.

Conn said he has never visited South Alabama, but he might do so in the future. Conn is interested to see what other schools may be interested in him and the recruiting period for 2015 is still very young.

“It feels great just knowing I have the talent to play college football,” Conn said.

In part, the linebacker has made his name by going to camps all around the country. He has gone to a NUC combine camp in Birmingham, an Ultimate 100 camp in Georgia, a top prospect camp in Oklahoma and he said he is planning to go to a five-star camp later this year.

At the NUC Ultimate 100 camp, he was named one of the top performers.

Conn said camps do a great job of “getting your name out there.”