Lady Bears move on to Montgomery 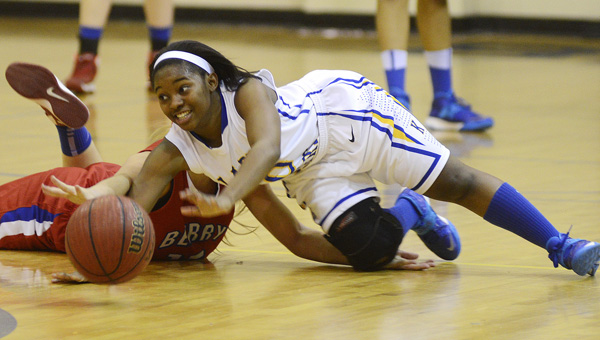 Keith senior Stephanie Carson dives for a losoe ball during the Lady Bears’ 56-42 victory over Berry on Thursday evening.–Jay Sowers

ORRVILLE — Before Thursday’s sub-regional game against Berry, Keith head coach Cecil Williams said he expected it to be a close and physical contest. While the game was surely physical, Keith took advantage of their steady defense to beat Berry 56-42.

Tied with the Wildcats 8-8 midway through the first quarter, the Lady Bears shut down the Berry offense and built a dominant 35-16 lead at halftime.

Williams said that early defensive pressure was key for his team to gain momentum and put the game out of reach early.

“Our defensive play helped us a lot,” Williams said. “We came with the pressure and they turned it over a few times, and that gave us the breathing room we needed to play our game.”

Berry head coach Caleb Hynds said the turnovers forced by the Keith defense in the first half got his team off their game plan and put the high powered Keith offense in control.

“They are so athletic,” Hynds said. “We started turning the ball over and I mean, you just can’t turn the ball over against this team because you’ve got Harriet Winchester, and whether it’s a 1-on-1 or a 1-on-2, she’s going to finish at the bucket.”

Winchester led the Lady Bears with 24 points, 11 of which came during the crucial second quarter. Zykia Pettway added 14 points.

Keith will next play in a regional game Tuesday evening at 6 p.m. at Alabama State University, and a year after the team lost to Brantley in the state championship game, Williams said his team should have no problem staying focused on the tasks that remain ahead of them.

“We’ve got the motivation from last year to look at,” Williams said. “We know where we were then and we didn’t finish. That’s the most humbling thing we have now is that we’ve been there before and we want to be ready to play last year. It’s just motivation now.”