Simmons, Bears soar past the Eagles into area championship 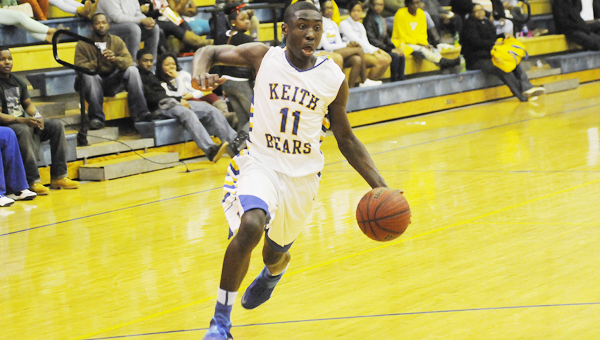 Keith’s John Pettway races the ball up the floor in the Bears’ blowout win over Ellwood Christian Friday night. With the win, Keith moves on to the Class 1A, Area 5 championship game and will face Autaugaville. With the loss, Ellwood Christian’s season comes to an end.–Daniel Evans

ORRVILLE — Behind a strong effort from Anfernee Simmons, No. 4 Keith breezed past Ellwood Christian 90-52 Friday night in a Class 1A, Area 5 semifinal.

Ellwood Christian had given No. 4 Keith trouble in the first two meetings between the county rivals this season and following a big win over Billingsley Tuesday, the Eagles seemed poised to once again give the Bears a test in Friday’s Class 1A, Area 5 semifinal.

Only this time, Keith never even gave Ellwood a chance, jumping on the Eagles from the opening tip and using suffocating defense to limit their opportunities. Keith soared to a quick 20-9 lead and kept building on it to lead 46-25 at halftime.

“We had it written on the wall: 0-0 Keith vs. 1-0 Ellwood,” Keith head coach Tommy Tisdale said. “Technically they had more wins in the postseason coming into this thing than we did.”

Tisdale said his team came in focused after Ellwood head coach Steven Hendrieth said following an Eagles’ win over Billingsley that his team had nothing to lose against the Bears.

If the game did start with all the pressure on the highly ranked Bears, it swapped to the Bears in a hurry.

“I guess the speed of the game and the pressure of the crowd probably got to us a little bit,” Hendrieth said. “It had guys a little timid, not moving their feet and reaching. This was an overwhelming experience for most of them.”

Turnovers doomed the upset-minded Eagles, who seemed taken out of their game plan early on by Keith’s consistent pressure.

Simmons scored 28 points for the Bears, with 26 of those coming in the first three quarters. He gave the Bears a big boost in the first half, knocking in two big three-pointers that shook the Eagles as soon as it looked like they had gotten their footing.

“That kid can play basketball,” Tisdale said. “Don’t get me wrong, he may have a night where he doesn’t make shots but right now that’s one of the advantages to being at home. He is shooting on his home goals. He had guys backing him up but he pulled up in transition and he played real, real well tonight.”

The Bears really poured it on in the third quarter. During one series of possessions, Simmons made two free throws, stole the ball on Ellwood’s ensuing inbounds pass and laid it up for a steal. On the next Eagles’ possession, John Pettway came up with a steal and slammed in a breakaway dunk.

In the fourth quarter, a lot of the Bears’ younger players got to see the floor. Keith’s next game is the Class 1A, Area 5 championship game against Autaguaville Monday night. Autaguaville rolled past Maplesville 75-52 in the first boys semifinal of the evening.

Keith’s Lady Bears blew past Billingsley 56-38 Friday in the semifinals of the Class 1A, Area 5 tournament.

The Bears dominated the paint, with Zykia Pettway seemingly grabbing every other rebound. The ones Pettway didn’t manage to bring down seemed to fall in the hands of one of the other Keith players, as they showcased their strength on the glass and used their post presence inside to force Billingsley into taking long-range shots most of the night.

One of the reasons for Keith’s rebounding edge was that Billingsley changed their lineup for the game, starting with five guards to give the Bears a different look.

“I tried a little something different. I took my post players — one of our good rebounders out and didn’t start her — and put another guard in her place,” Billingsley head coach Shawn Bailey said. “I thought that was going to give us an edge to get up having five guards in the game but it didn’t work.”

Keith never trailed and the outcome was never really in doubt after the first few minutes. Harriet Winchester and Stephanie Carson each drove to the basket for layups through contact in the opening minutes and made foul shots to complete three-point plays. Keith led 9-0 with 6:12 left in the first quarter and the advantage grew to 32-14 by the half.

Ellwood Christian’s Lady Eagles saw their season come to an end Friday night in a 75-33 loss to Autaugaville in the Class 1A, Area 5 tournament.