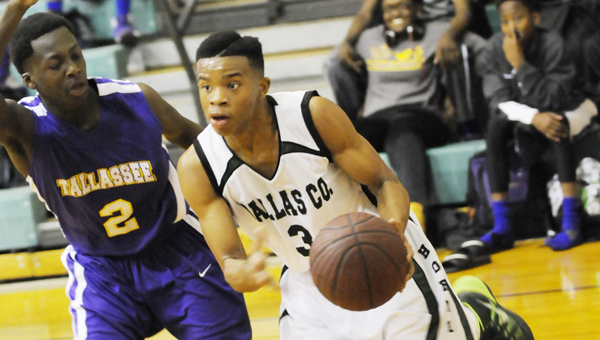 Dallas County Hornets point guard Raheem Phillips drives past a Tallassee defender in Friday afternoon’s game. The contest was played as an in-school game and started at 1 p.m.–Daniel Evans

Dallas County, ranked No. 2 in Class 4A, dominated Tallassee and assured itself of hosting the Class 4A, Area 6 tournament.

The Hornets ran away with the game early in a 68-34 win. Dallas County led 37-21 at the half and never looked back in a fairly easy victory.

“We came out and got an early lead and we were able to get an early lead and sort of coast to the win,” Dallas County head coach Willie Moore said. “I am pleased with our effort later in the second half. We took control of the game.”

Not to be lost in the blowout win is that the Hornets postseason run will start at home, in front of their home fans. Moore said that cannot be underestimated.

“The big part is you don’t have to pay for travel,” Moore said.

“You get to play it at home but it doesn’t guarantee you that you win. Most people assume that if you are playing at home then you’ll win, but I’d rather take my chances at home than be traveling on the road.”

The Hornets were led by Jerrod Moorer who scored 24 points in the game. Moorer had scored over 40 points in his last two games, but Friday other Hornets shouldered more of the scoring load and the Dallas County starters sat most of the fourth quarter.

Moore said Moorer has been more aggressive since forward William Lee went down with a facial fracture that has kept him out of the last four games and that point guard Raheem Phillips deserves a lot of credit for Moorer’s scoring success.

“He is one of the main reasons Jerrod has been able to get open looks because of his ability being able to penetrate and get to the basket real easy.”

Phillips scored six points in the game and center Lowell Furlow added 12 for the Hornets. Dallas County’s next game is against Elmore County Tuesday.

The Dallas County Lady Hornets (5-14) held Tallassee to only two points in the fourth quarter Friday in a come-from-behind 29-25 win.

“I’m happy for them,” Dallas County head coach Charles Thompson said. “They worked hard and they deserve to win, but we still have to get better.”

The Hornets trailed 23-22 after three quarters, but Moore started the fourth with a drive baseline and a layup to give the Hornets the lead with 6:48 remaining.

Moore added three free throws in the remaining time and the Hornets used suffocating defense to limit Tallassee to only a single basket in the final quarter.