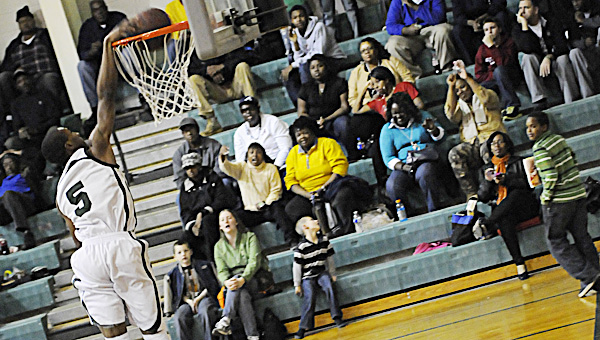 Dallas County’s Jerrod Moorer dunks the ball in the second half of the Hornets win over Childersburg Thursday night. –Daniel Evans

PLANTERSVILLE — Dallas County, No. 2 in the ASWA rankings, pulled away from Childersburg Thursday night in a 67-46 win, but held its breath late in the game when William Lee had his feet unintentionally knocked out from under him after blocking a shot.

Hornets head coach Willie Moore said Lee will likely need stitches around his lip area and that he may also have a loose tooth or two.

“The game got marred with Lee going down tonight,” Moore said as he walked off the court to go check on his big man.

The UAB signee’s legs flung backwards and his head went forward, and since he was attempting to block a shot his arms were unable to help him break his fall.

Despite how the game ended, the Hornets won a big area game that leaves Dallas County atop Class 4A, Area 6 and keeps them in the driver’s seat to host the area tournament  if they can take care of business over the next two weeks.

But it wasn’t easy. The Hornets were tested in the first half by a Childersburg team that started shaky but gained confidence as the half progressed.

Moore felt his team was still riding high after a win over Keith Tuesday night.

“We just didn’t make an adjustment and come out and play extremely hard like we should have,” Moore said.

The Hornets took a 19-7 lead after four three-pointers in the first quarter, but Childersburg fought back with a 17-8 run to end the first half.

Childersburg’s Kai Mitchell hit a three with just seconds remaining in the second quarter to make the score 32-27 Hornets at halftime.

“We got out to an early lead and then we lost focus,” Moore said. “We weren’t playing as a complete unit and allowed them to get in and out of the lane when they wanted to.”

Childersburg found itself right in the game after a first half that could have easily gotten away, because of a gusty second quarter where the Tigers outscored Dallas County 17-11.

The second half was a completely different story, with the Hornets holding Childersburg to 10 points in the third quarter.

“They made four threes early and I was proud of the kids for bouncing back and for making it a game at the half, but in the second half they just had too much size and quickness,” Childersburg head coach Al Barnett said. “We were stuck on 31 points for a long time.”

Raheem Phillips made a three to stretch the Hornets’ lead to 40-31 with 4:28 left in the third quarter and minutes later Jerrod Moorer added a steal and dunk.By the time a 13-0 Dallas County run was over, the Hornets had stretched their lead to 49-31.

From there, Dallas County poured it on.

The Hornets had a 60-39 lead when Lee went up for a block and came down on a Childersburg player, which caused him to lose his balance and fall.

Lee was held to nine points in the game but has been dealing with a nagging toe injury that kept him out of a game last week.

Now, he may have a few other ailments to play through.