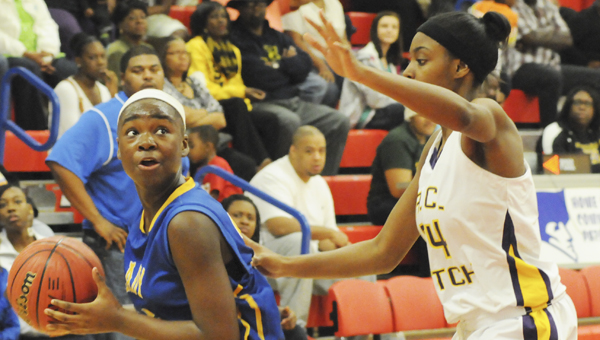 Shatavia Moore prepares to go up for a shot in Keith’s win over R. C. Hatch Saturday night at Wallace Community College Selma. The Bears held on to win the girls championship in the Dallas County Classic Tournament.–Daniel Evans

Stuck in a close game in the second half, Keith started feeding Zykia Pettway the ball in the post. She responded with one of her best games of the season, earning the tournament’s MVP award after a 21 point performance.

“She is strong and can finish around the basket,” Keith head coach Cecil Williams said.

“I like her game. She’s aggressive and she can rebound. When she really puts her mind to it, she’s a great player.”

Despite Pettway’s best efforts, the Bears still found themselves in a game in the fourth quarter, but Keith was able to hold on because of suffocating defense in the game’s final minutes. “Defensively we made some stops,” Williams said. “We got rebounds when we needed them and they had a few turnovers.”

Selma and Keith weren’t playing in the game they wanted to be in Saturday at the Dallas County Classic Tournament,... read more