Southside comes from behind to defeat Keith 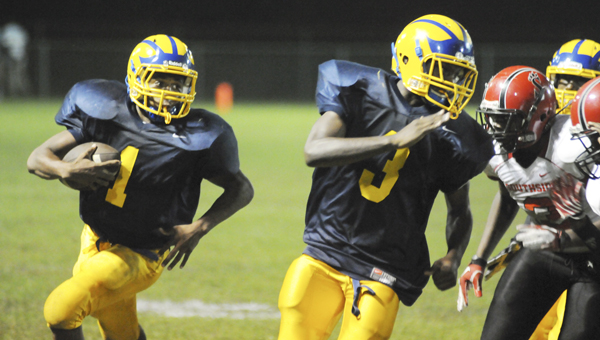 Keith running back Walton Young runs around the right end for a big gain in the Bears’ loss to Southside on Friday night. Southside held the Bears to 159 total yards in the game. The Panthers scored the game winning touchdown with 3:16 left in the fourth quarter to finish off a come from behind victory after trailing most of the night.–Daniel Evans

ORRVILLE — The Southside Panthers came from behind to defeat the Keith Bears 18-14 Friday night in a game that started as a defensive struggle, but ended like an offensive shootout.

The Panthers were forced to watch Keith quarterback Maurice Crumpton drive his Bears the length of the field in the closing minutes to give Keith a 14-12 lead. Crumpton scored on his eighth carry of the drive with 3:40 left, leaving Keith in great shape to get a victory.

On the Panthers next play from scrimmage, quarterback Chris Raymond threw a 48-yard pass to De’Vonte Alexander to give Southside a first and goal at the 2-yard line. Khamari Gibbs did the rest, rushing in for the game winning score a 2-yard run that gave Southside an 18-14 lead with 3:16 remaining in the game.

The big pass play that set up the winning score, called “Bucket Buster”, was a play the Panthers had run earlier in the game, resulting in a big gain. With the game on the line, Southside went back to it again.

Keith head coach Harry Crum was upset that his team gave up the big play, especially since that is the one thing his team had to avoid in that situation.

“I told them don’t give up anything cheap. By cheap, I mean big plays over 30-yards,” Crum said. “I think we were just asleep. I think maybe we were thinking back to the touchdown scoring play and we just caught sleeping. That big play is the one that broke our back.”

The Bears’ Walton Young fumbled on the next play from scrimmage and the Panthers recovered, allowing Southside to run the clock down. Keith was able to get the ball one more time, but the Bears had little time and could not advance the ball.

All week Southside head coach Daniel Flowers stressed assignment football to his defense, because he knew Keith’s powerful rushing offense takes advantage of any lack in discipline. The Panthers defense must have been listening, because they held Keith to 159 yards of offense on the night.

“Our defense played lights out all night,” Flowers said. “Our offense put us in bad positions all night. The defense pushed us through it. Coach Boyd and his defense helped us out a lot tonight.”

Both teams gave the ball away throughout the game. Raymond threw an interception in the endzone in the second quarter when it looked like the Panthers might take the lead and a fumble set up Keith’s go-ahead score with under four minutes left.

Gibbs scored the first touchdown of the night with 7:06 remaining in the first quarter, but Keith answered with a 26-yard touchdown run by Jeremiah Campbell. The score stayed 8-6 until Gibbs ran for his second score with 11:06 left in the fourth quarter. Keith then answered with Crumpton’s score, before Raymond’s pass set the Panthers up for the win. Next week Southside plays at Opp and Keith plays at Billingsley.