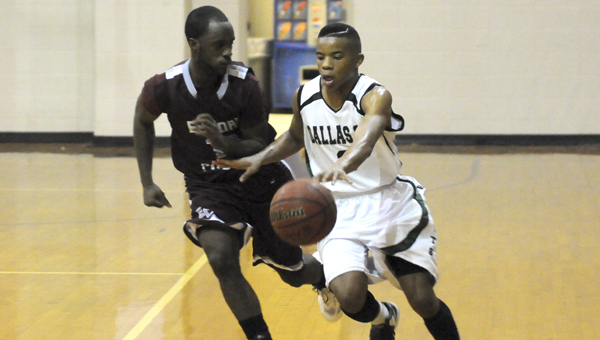 PLANTERSVILLE — The Class 4A No. 1 Dallas County Hornets were able to put on a rout during the first half of Friday night’s matchup against the Elmore County Panthers and coasted to a 63-23 victory in the first round of the Class 4A area 6 tournament.

“I thought coming in we had a great chance to win the game, I just wanted our kids to look good doing it and try to prevent any injuries. Our size and athleticism kind of took over and we were able to get rebounds and pull away early,” Moore said.

Nick Williams scored on a layup and Evan Wright made two free throws during the first five minutes of the game but Elmore County wouldn’t score again until 1:47 left in the second period resulting in a 39-0 run by the Hornets.

Chad Martin began the run with a steal followed by an easy layup to make the score 11-4 with 3:09 left in the first period. Martin would make three more baskets plus a free throw in the first, helping the Hornets acquire an 18-4 lead.

William Lee caught a pass under the bucket from Markell Harris with 5:40 remaining in the half and dunked the ball, pleasing the home crowd.

The Hornets went on to take a 50-11 lead into halftime.

The Hornets will play Childersburg on Monday at home for the area championship starting at 6 p.m.