No. 5 Hornets overcome late deficit to defeat No. 2 Bears 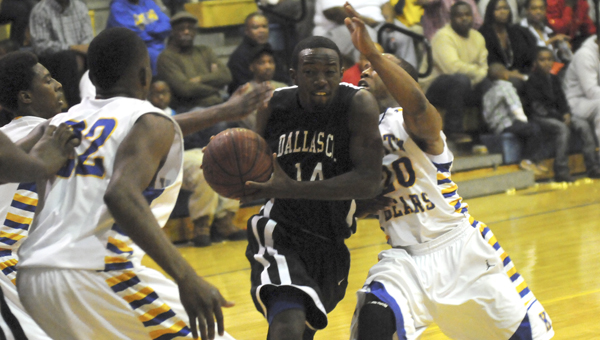 Dallas County’s Markell Harris, center, tries to get by Keith’s Rodney Ellis, right, and Demond Holmes, left, during Monday’s game at Keith. Dallas County came back in the final minutes for a 48-44 win. -- Robert Hudson

ORRVILLE — In a game that went down to the wire, the No. 5 Dallas County Hornets overcame a late deficit to defeat the No. 2 Keith Bears 48-44 on Monday.

Willie Moore, head boys basketball coach of Dallas County (17-5, ranked No. 5 in Class 4A), said his team did a good job of finding the easy baskets in the second half of a hard-fought win.

“We felt really good about the way we played. Keith is a really, really good team. They sort of controlled the pace of the game for the most part,” Moore said. “They shot the ball extremely well the first half, but in the second half we sort of got some easy buckets there late to put us up.”

Tommy Tisdale, head boys basketball coach of Keith (13-8, ranked No. 2 in Class 1A), said the Bears were hurt by little mistakes in crunch time, but he’s proud of his team’s effort and hopes it can build on that moving forward.

“We had a few mental errors down the stretch, some things we’re still growing through. We took a couple quick goes at the basket. I don’t know what it was,” Tisdale said. “We spread the court not to really stall the ball, but just to get some space. We took some bad angles at times. Dallas County is good ball club. Down on the block, I thought we did as good as we could with what we had. They got a little physical with the trap, but my guys are supposed to be able to see through and pass through that, but we couldn’t for whatever reason.”

The Bears took a 38-35 lead into the final quarter after a Walton Young 3-pointer at the buzzer to end the third.

But the Hornets fought back, as Chad Martin hit one of two free throws, and Jerrod Moorer scored a three-point play after hitting a shot and getting the foul to tie the game up at 38-38 with 6:08 left to play.

Keith took the lead right back as John Pettway hit a teardrop shot in the lane over the outstretched arm of 6’8 center William Lee to give the Bears a 40-38 edge with 5:40 left.

The Bears added on to their lead when Anfernee Simmons hit a mid-range jumper to make it a 42-38 game with 4:27 left.

Keith was able to wind the clock down before Dallas County’s Markell Harris scored on a layup to bring the Hornets closer at 42-40 with 2:40 remaining.

With both teams in the bonus, each squad had trips to the line, as Keith’s Rodney Ellis hit a pair of free throws to make it 44-40 before Moorer and Harris each hit two free throws to tie the game at 44-44 with 1:29 remaining.

After a Bears turnover, the Hornets took the lead when Kendall Motley scored cutting to the basket to make it a 46-44 game with 38 seconds left.

The Bears came out of a timeout and found Simmons open for a three, but his shot bounced off the rim and Lee got the rebound for the Hornets before being fouled and sent to the free throw line with 9.7 seconds left.

Lee buried both free throws to lock up the victory for the Hornets.

Lee led Dallas County with 18 points, while Martin had 12 points and Harris had 9 points for the Hornets.

Simmons led Keith with 14 points, while Ellis had 12 points and Pettway had 8 points for the Bears.

Keith will take the floor again on Tuesday at Ellwood for an area game starting at 5 p.m.