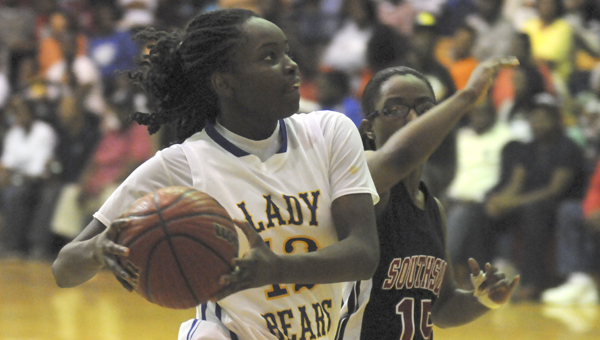 ORRVILLE — The Southside Lady Panthers closed the gap early in the second half, but the Keith Lady Bears controlled the game the rest of the way to capture a 54-35 home victory on Friday.

Cecil Williams, head girls basketball coach of Keith (17-3), said the Lady Bears were tired at one point, but were able to turn up their defensive play in the win.

“We played good team defense. We kind of slowed down and got a little winded, but we kind of picked it back up,” Williams said. “Our defense really helped us a lot coming back out in that third quarter.”

The Lady Bears took a 25-16 lead into the third quarter with Lyteisha Phillips scoring the quarter’s opening basket to extend that lead to 27-16.

But Ki’Onna Likely came off the bench and hit a pair of baskets on consecutive offensive possessions for the Lady Panthers (7-11) to cut the Keith lead back to single digits at 27-20 with 5:56 left in the third.

But that’s as close as the Lady Panthers got, as Keith’s Harriet Winchester hit a 3-pointer to make it a ten-point game at 30-20.

Zykia Pettway added a shot in the paint and the free throw after being fouled, extending the Lady Bears’ lead to 33-20 with 4:44 left in the quarter.

Chelsea Arnold hit a free throw to make it a 33-21 game before Winchester hit another three that started a 13-2 Keith run that also included baskets by Stephanie Carson, Rodaisha Holman, Pettway and Phillips to help the Lady Bears close the third with a 44-25 lead, ultimately putting the game out of Southside’s reach.

Jason Bothwell, head girls basketball coach of Southside, said the Lady Panthers have consistently been hurt by a lack of depth this season, but he’s proud of his team for giving its all the entire game.

“It was pretty much the same tale of our season and that’s just depth. We don’t have a lot of depth at a lot of positions, so we’re kind of just forced to play with our backs against the wall,” Bothwell said, “but I applaud my girls for continuing to play and continuing to show effort through the entire game. Regardless of who says what, good or bad, these girls continue to play and come out and give me their all.”

Pettway led Keith with 20 points, 11 of which she scored in the opening quarter.

Phillips and Winchester each had 9 points for Keith.

Tanisha Blevins had 12 points for Southside, while Ashley Cunningham had 7 points and Calvondrea Blackmon had 6 points for the Lady Panthers.

Keith will take the floor again on Monday at home against Dallas County starting at 5 p.m., while Southside will travel to Excel on Tuesday at 4:30 p.m. for an area game.