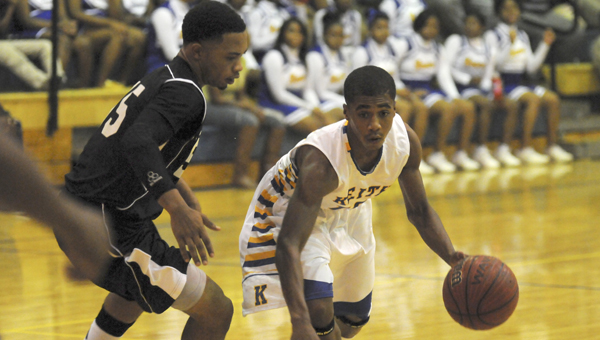 Keith’s Walton Young, right, tries to drive past Ellwood’s Devonta Cleveland during Tuesday’s game in Orrville. Keith pulled away in the second half for a 74-40 win over Ellwood. -- Robert Hudson

ORRVILLE — The Ellwood Christian Academy Eagles kept it close in the first half, but the No. 4 Keith Bears dominated the second half on their way to a 74-40 home win in area play on Tuesday.

Tommy Tisdale, head boys basketball coach of Keith (4-4, 1-0), said the Bears got off to a slow start, but got easy baskets, started hitting free throws, and had great play from the bench in the second half.

“I told the guys that we weren’t playing like we’ve been playing. They did a lot of things driving to the basket and I had some guys reaching early on. I don’t know if it was anxiety of playing Ellwood for the first time and the familiarity with the players — they’ve got a few guys that have actually been in our program,” Tisdale said. “You’ve got guys that know the other guys, which makes it completely different, not the magnitude of any of our older rivalries, but you’re actually going up against a kid that suited up with you. It was kind of feeling that out and things. I challenged my starters and seniors to come out in the second half and give us a better performance than the first half, and they responded.”

Keith pushed its first half lead to 31-21 as Carstella Hayes hit a free throw and Walton Young scored on a fast break layup, but Ellwood (1-4, 0-1) responded with a jumper from Bennett Harris and a free throw by Amari Spencer that made it 31-24 at halftime.

But Keith outscored the Eagles 22-6 in the third quarter as they cruised to the area win.

Steven Hendrieth, head boys basketball coach of Ellwood, said his team made too many mistakes, but will continue to work to get better.

“Ball handling and turnovers, that’s basically it. I’m at a loss for words. This is probably the worst game we’ve played this year,” Hendrieth said. “I don’t know if it was the atmosphere or the pressure. But we’re still going to remain positive.”

Anfernee Simmons and Rodney Ellis led Keith with 13 points each, while Harris led Ellwood with 11 points and Tyease Moseley had 7 points for Ellwood.

The No. 7 Keith Lady Bears defeated the Ellwood Christian Academy Lady Eagles 57-28 at home on Tuesday in area play.

Lyteisha Phillips had 10 points for Keith, while Rodaisha Holman and Harriet Winchester had 7 points.

Mykiria Mitchell had 10 points for Ellwood and Ebony Simpson had 9 points for the Lady Eagles.

The Keith boys and girls teams will play again on Friday at Selma High School starting at 5 p.m.

Ellwood’s boys and girls will play Billingsley on Dec. 11.

Senators suffer first loss of season at home to…