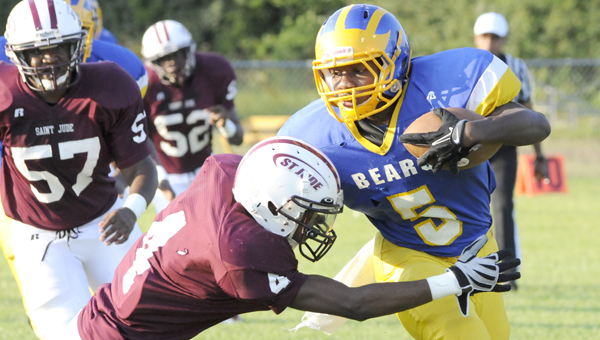 Keith running back Martavius Harris (5) stiff arms a Saint Jude defender during a jamboree football game at Keith this past spring. Keith will face Saint Jude in the first round of the Alabama High School Athletic Association Class 1A state playoffs on Friday, Nov. 9. -- File Photo

There’s still one game left in the regular season, but with the region slate complete, the pairings for the first round of the Alabama High School Athletic Association playoffs have been handed out.

The Keith High School Bears and the Ellwood Christian Academy Eagles have each received their opponents for round one of the AHSAA Class 1A state playoffs, with one hitting the road and the other playing at home.

The Bears faced off against Saint Jude at home for a pair of quarters in a spring jamboree game, so there’s some familiarity.

Harry Crum, head football coach of Keith High School, said Saint Jude is a tough opponent, but the Bears are focused squarely on their homecoming game on Friday and closing the regular season on a high note.

“They’re traditionally athletic. We’ve never beaten them,” Crum said, “so just from that standpoint, it’s going to be a task. That region over there … it was a pretty close race between second and third place, so we’re going to have to play. From this point on, everybody’s coming to play. But we’ve got to focus on the game at hand and we can’t look to Saint Jude until after Friday night because we’re really trying to get this win against Choctaw County.”

Eagles head football coach Mike Stokes said his players have to maintain focus leading up to the playoffs.

“Our challenge is trying to keep the kids focused,” Stokes said. “Excitement is fine right now, but they’ve got to understand we’re going there to play a football game.”

Female Athlete of the Week: Morgan’s Mock-Jordan a force…