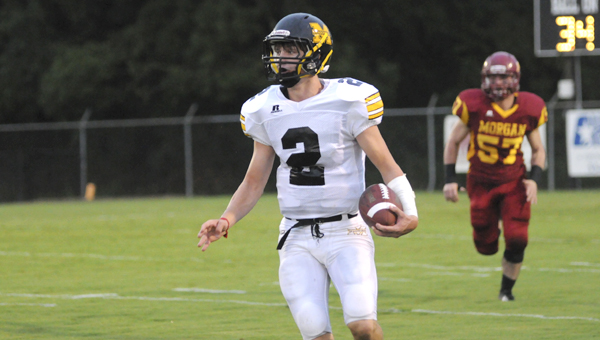 After leading the Trojans to their second straight win, Meadowview’s Dylan Lawrence is the male athlete of the week.

Lawrence had 229 yards rushing on 11 carries, which included four touchdowns on the ground in last Friday’s 67-7 home win over Chambers Academy, the second straight for Meadowview on the season.

But Lawrence’s impact for the Trojans doesn’t stop on offense, as he also plays safety and linebacker for Meadowview and had three interceptions last Friday, returning two for touchdowns.

Jones said Lawrence’s versatility is big for the Trojans.

“It means a lot because I decided before the year started that we need to get the ball in his hands as much as we could to make plays,” Jones said. “It’s a real good situation when we can put him all over the field, plus if the starting quarterback were to go down, he knows how to run our offense. It’s a big advantage for us.”

Jones added Lawrence’s presence on the field also helps boost the play of his teammates.

“He’s a team leader, everybody looks up to him,” Jones said. “If he’s having a good game, the other guys seem to rally around him. He’s just a great athlete.”

Meadowview Christian’s Dylan Lawrence (2) tries to get to the outside during last Friday’s win over Chambers Academy. Meadowview will... read more