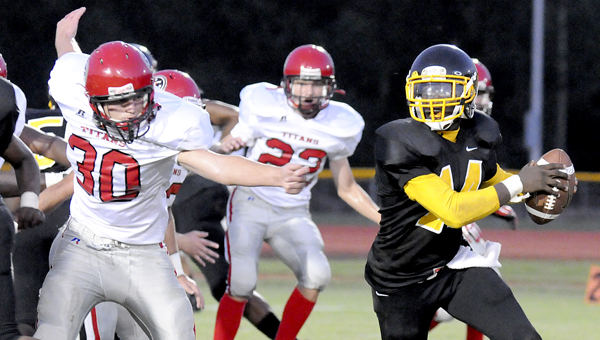 If there was anyone in more need of an icepack Thursday evening, it was the clock operator at Memorial Stadium. It was his job to keep track of the scoring in a game that saw the Ellwood Christian Academy Eagles crush the Holy Spirit Titans 62-6.

After not winning a game in 11-man football the past two seasons, the Eagles now move to 2-0 on the year, 1-0 in region play, while the loss moves the Titans to 0-2 overall and 0-1 in the region.

“Despite the score, we have a long way to go and a lot of work to do,” Ellwood Christian head coach Mike Stokes said. “Yes, we played well tonight, but there are still mistakes that we are making, silly mistakes, and areas that must get better.”

Even while his team celebrated their victory nearby, Stokes was focused on one statistic that bothered him the most.

“We can not expect to have 105 yards in penalties and expect to beat any of the teams we have remaining on our schedule,” Stokes said. “That is something we are going to work on, and work on hard before next week.

In fact, the Eagles had more yards in penalties, 105, than the Titans had overall.

In the game, the Eagles racked up 286 yards of total offense, while holding the Titans to just 80 total yards.

At the end of the first half, the Titans had minus-9 yards of total offense.

“Our defense did play very well tonight and we are going to have to ride them the next few weeks,” Stokes said. “If the defense continues to play the way they are now — hard and nasty — then we should be OK.”

Sophomore quarterback Jalen Furlow had another good week managing the Eagles running attack. Furlow was 2-for-2 passing in just over a half of action, for 31 yards and one touchdown, while picking up another 33 yards rushing.

Alex Arrington led the Eagles in rushing, picking up 67 yards on three carries, including one 23-yard score.

Kerry Ford had 37 yards rushing for Ellwood, which included touchdown runs of six yards and 25 yards.

Rayford Mitchell had only one rush on the evening, but it was good enough for a 20-yard touchdown for the Eagles.

Eagle running back Deriaun Glenn picked up 56 yards on the ground, which included a touchdown of his own, a 30-yard score in the first quarter.

Furlow’s lone touchdown pass on the evening was an 18-yard pass to Kendall Thomas.

The first came when Ellwood’s Cordarius Hayes picked up a fumbled kickoff return at the 22-yard line and returned it to the end zone in the second quarter.

In the third quarter, Ellwood’s Kareem Ross blocked a Holy Spirit punt and returned it 10 yards for a touchdown.

Holy Spirit’s lone score came early in the fourth quarter, when Titan quarterback Garrett Anderson ran up the middle from four yards out. The two point attempt failed and ended the scoring on the evening.

The Southside High School Panthers are looking to bounce back after a season-opening loss, but they’ll have to do so... read more