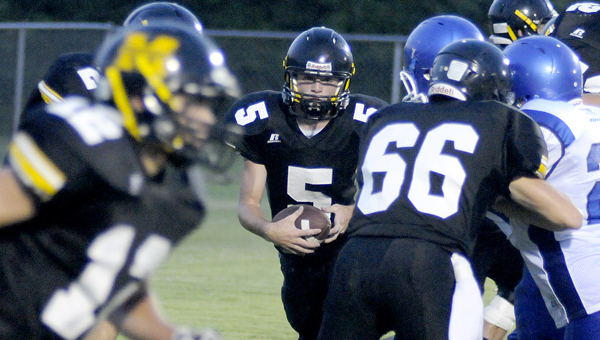 Meadowview Christian quarterback Seth Taylor (5) looks for running room during the Trojan’s preseason jamboree game against Southern Academy Friday. While the Trojans came up short against Southern, Meadowview head coach Lebo Jones was pleased with the team speed his team showed during the contest. -- Tim Reeves

For Meadowview Christian head coach Lebo Jones and Morgan Academy head coach Bob Taylor, Friday evening was not an evening to watch the scoreboard, but rather an opportunity to watch their young teams face live action for the very first time.

Both teams hosted preseason jamborees, giving their teams the opportunity to work out the rust and fine-tune their attacks ahead of next week’s season openers.

“We have had a hard time scrimmaging this summer because we don’t have the numbers on our team to run against a scout team,” Jones said. “Playing tonight really helped us.”

The Trojans took on Southern Academy and went toe-to-toe with them before falling 23-13 in the modified contest. Meadowview held a lead for a good portion of the first half, before Southern was able to capitalize on big plays and spotty tackling efforts by the Trojans.

“We need to do a much better job blocking and tackling,” Jones said. “We were able to do some things offensively when were able to get outside, but we couldn’t do anything between the tackles.”

For Taylor, the three-team jamboree gave his young Senators the chance to take on two different opponents as they welcomed both Wilcox Academy and Macon-East.

The Senators lost in their two-quarter contest against Wilcox 14-0, but rebounded to beat Macon-East 14-0.

Wilcox had a perfect evening at the jamboree, beating Macon-East 14-6 in their two-quarter match-up.

Both coaches walked away from their respective games with the conditioning their teams showcased, Lebo saying he was pleased with the team speed his Trojans showed and the way they ran to the ball.

As for Taylor, he was happy to see his offensive units execute, but not at all happy with their inability to finish drives.

“We were able to move the ball, but we couldn’t capitalize when we had the opportunity to do so against Wilcox,” Taylor said. “We’ve got to be a little more focused from the get go; get ourselves ready to go and ready to play from the first snap.”

Morgan will travel to take on Pike Liberal Arts in their season opener, while Meadowview will welcome Sumter Academy to Wasden Field in their opener.