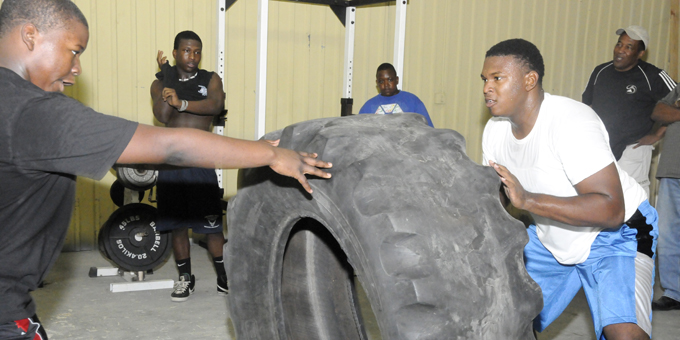 Ellwood Christian Academy football players Frank McGill, left, and James Phillips push a tire back and forth during summer workouts on Tuesday. Ellwood has also been lifting weights and running sprints in preparation for the upcoming season. -- Robert Hudson

With summer strength and conditioning well underway, the Ellwood Christian Academy Eagles are continuing to get ready for their transition to the Alabama High School Athletic Association this season.

“It’s been good. We’ve been having between 20 and 30 players a day,” Stokes said. “It’s probably the best one [summer] I’ve had since I’ve been there. We’re hitting the weights hard and running every day. That’s been our main focus.”

Stokes added it’s crucial for players to work hard during the summer because the offseason is the most important part of the season as a whole.

“To me, that’s the most important part of the season. You get in shape and you get ready, it can take you through the season,” Stokes said, “but if you’re not in shape it’s going to be rough on you. That’s why we’re working so hard at it now.”

One of the things Stokes highlighted during the spring was that the Eagles have a lot of skill position players on their roster, and one of the keys this summer has been building up the speed of those players.

“We’ve been doing a lot of footwork, a lot of squats, a lot of box jumps,” Stokes said. “We’ve got an exercise called the frog jump to build speed. From what I see, it’s paying off.”

As the Eagles will enter AHSAA Class 1A this season after playing in the Alabama Independent School Association last year, they’ve been able to have a little bit more flexibility with scheduling.

Stokes said travel distance was a big focus in the scheduling process, as the Eagles have teams such as Selma High School, and Francis Marion of neighboring Perry County among their non-region games.

“Last year, we did a lot of traveling, and we’re trying to minimize that because once you do a lot of traveling, you’re spending three or four hours on a bus and, believe it or not, your players are physically and mentally tired because of the long bus ride,” Stokes said. “So we tried to put together a schedule where we didn’t have to do a whole lot of traveling, yet we can still play good, quality football teams.”

Travel wise, the Eagles have also benefited from being in a region that includes Dallas County foe Keith High School, and Maplesville of neighboring Chilton County, as well as Autaugaville of nearby Autauga County.

Stokes said it’s going to be a tough region, but with hard work, the Eagles should be able to improve over last season.

“It’s going to be a tough area because we’ve got people like Maplesville and Keith,” Stokes said. “We’re going to have our work cut out for us, but I just think that if we can get everybody on the same page and everybody doing things the right way, I really and truly think we’ll be okay, we can be a better football team than we were last year.”

Selma Dixie Pre-Majors All-Star Ethan Fancher swings at a pitch during a district-tournament game against Butler on Friday at Bloch... read more