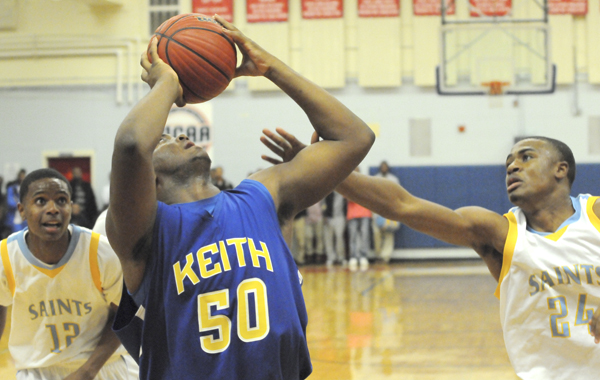 Keith High School’s Issac Boglin, center, goes up for a shot as Selma defender Henry Blevins, right, attempts a block during a game this past season. The Bears and Saints will be among seven schools to face off in Keith’s play day on Thursday in Orrville. -- Robert Hudson

The start of high school basketball season may be five months away, but a few local teams are showing it’s never too early to prepare for a return to the court.

The Keith High School Bears boys basketball team will host six teams, including local squads from Selma and Southside high schools, for play day scrimmage games on Thursday beginning at 9 a.m., with the last game starting at 4:30 p.m., at Keith.

Along with Keith, Selma and Southside, other teams attending include Sweetwater, Holt High School near Tuscaloosa, Francis Marion, and Murphy High School of Mobile.

Admission is $2 and concessions will be sold.

Tommy Tisdale, head basketball coach of Keith High School, said play days like these give the Bears a chance to see where they stand leading up to the season.

“In the offseason, we want to kind of gauge where our guys are and that’s why we have been hosting ours at Keith so early,” Tisdale said. “We’ve been through spring practice, we’ve been through spring conditioning, spring tryouts. Now is an opportunity to just see where you are. We’ve got new guys coming up from JV (junior varsity), we’ve got some veterans that are going to get a little bit more playing time.”

Each team will play at least three, 32 minute games, with Keith playing four.

The day will start with Southside versus Holt at 9 a.m., followed by Francis Marion versus Sweetwater at 9:45 a.m.

Keith will play its first game against Murphy at 10:30 a.m., followed by Selma versus Holt at 11:15 a.m., and Sweetwater versus Southside at noon.

The day will wrap up with Keith versus Southside at 3 p.m., Murphy versus Selma at 3:45 p.m. and finally Keith versus Francis Marion at 4:30 p.m.

Tisdale said the Bears will also be participating in similar play days during the summer, including one at Southside and one in Tuscaloosa, with each helping the Bears understand where they need improvement and what they’re good at.

“By that time, we will have played nine to ten games, and then we can see the direction we’re headed and what we need to work on more, so that’s kind of what we get out of it,” Tisdale said. “It’s not about wins and losses. It’s just to see where we are.”

Tisdale said play days also give teams a chance to see how players react in certain game situations such as crunch time.

And with teams from each of the state of Alabama’s six classifications — with the exception of Class 4A — participating, Tisdale said it’ll put the Bears to the test against a variety of different players and playing styles.

“We try to mix it (scheduling) up during the season,” Tisdale said. “We also want to mix it up during the summer time. For our guys, we want to just get a look at some different caliber players.”

Youth leagues prepare for transition to all-stars after playoffs