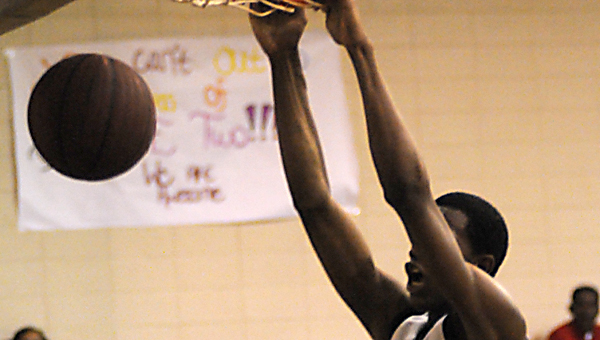 Dallas County High School’s William Lee prepares to put the finishing touches on a dunk during an 87-69 win in Plantersville. Lee led the Hornets with 21 points on the night. -- Robert Hudson

PLANTERSVILLE — In a battle of two Hornets, it was the No. 7 Dallas County Hornets who had the strongest sting, as they defeated the Beauregard Hornets 87-69 Friday in a sub-regional playoff game.

The win sends Dallas County (24-4) to the Class 4A Central Regional Tournament in Montgomery at Alabama State University’s Acadome, where it will play Sumter Central Thursday, Feb. 23 at 7:30 p.m.

Dallas County head basketball coach Willie Moore was not impressed with his team’s performance against Beauregard, and said that if it plays the same way next Thursday, the season could come to an end.

“We played like crap. We didn’t defend, we didn’t rebound, we didn’t play together. We played for ourselves tonight, and I told them in the locker room that if we do that next Thursday night, we’re going to get embarrassed,” Moore said. “It’s like guys were not focused on doing their job. We practiced for four days in preparation for tonight for the team we had to play. We knew we were better than the team we were playing and we had things that they didn’t have, but we didn’t go out and play together tonight at all. I’m highly disappointed.”

Beauregard’s Erroll Boglin hit a pair of free throws to cut the lead to five, but Dallas County guard Markell Harris hit two straight baskets in the paint to make it a 41-32 game with 6:56 left in the third quarter.

Beauregard answered with a basket from Calvin Reese, but Dallas County’s BJ Leshore scored on a layup to make the score 43-34 with 5:36 left in the quarter.