Eufaula no match for Selma 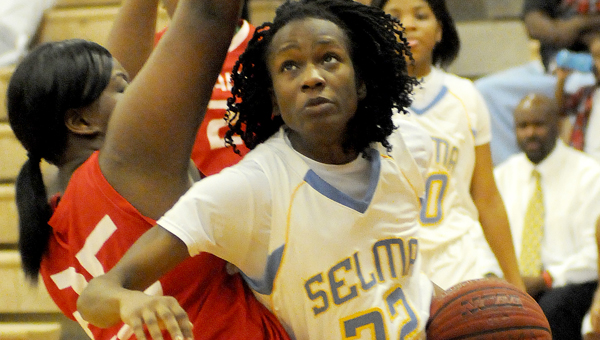 The No. 9 Selma Lady Saints used tough defense to control the pace of the game, as they defeated the Eufaula Tigers 44-26 Thursday at Wallace Community College-Selma in sub-regional playoff action.

Anthony Harris, head coach of the Lady Saints (25-3), said his team outpaced the opponent on defense and on the glass.

“We did a tremendous job, we played good defense, we took them out of their rhythm,” Harris said. “They wanted to shoot that three. We outran them and I think we got them tired, plus they’re not used to this floor and I think it took the gas out of them. We went up on them and never looked back. I’ll give that game to defense. I think we played good defense and controlled the boards.”

Selma jumped ahead early and pushed its lead to double digits in the second quarter at 18-8 with 6:50 remaining, but the Tigers went on a 7-2 run and cut the Lady Saints lead down to 20-15.

The Lady Saints turned up the defense in the third quarter, holding Eufaula to three points, while Peeples and senior Jameneshia Caver scored all of Selma’s points in the quarter and pushed the lead to 32-18 going into the fourth.

Eufaula never recovered and managed only eight points the rest of the way.

Harris credited his post players and the play of his backup junior point guard Kendra McCovery, who stepped in after senior point guard Jonishia Jackson went down in the first quarter with an ankle injury and missed some time before returning later in the game.

When the Alabama Independent School Association released its new alignments recently, there were some changes for both Morgan Academy and... read more