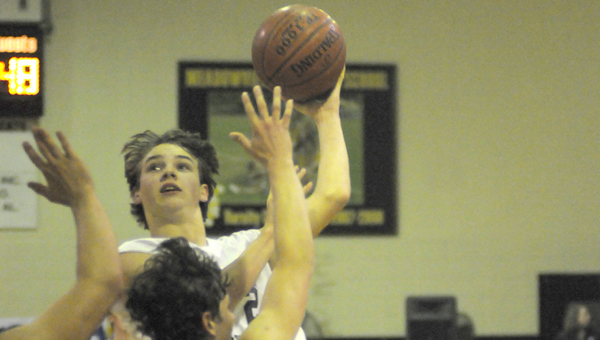 Dylan Lawrence lays a hookshot over the Autauga Academy defense. Lawrence and the Trojans dominated the Generals in a 76-63 win. The win improved Meadowview to 4-7 on the year. -- Robert Hudson

The Meadowview Christian School Trojans jumped out to a big lead and held off a late comeback attempt to defeat the Autauga Academy Generals 76-63 at home on Tuesday.

“The key to victory was we played great defense and we rebounded the ball,” Jones said. “I thought we played three fourths of the game real hard, we kind of slacked up there for a little while and let them get back in it, but we showed enough character to finish them off.”

The Trojans were ahead 57-41 to start the fourth quarter, but the Generals would not give up, as Willie Shackelford scored in the paint, sparking an 11-0 Autauga run that made the score 57-52 with 5:20 left to play.

Devante Moorer scored under the basket to extend the Trojans’ lead to 59-54.

Shackelford converted a pair of free throws after being fouled, but Meadowview’s Dylan Lawrence hit a pair of his own to make it 61-54 with 4:18 left to play.

Lawrence stole a pass on the Generals’ next possession and took it the distance to extend the Trojans’ lead to 63-54.

The Generals hit three of six free throws after a technical foul to make it 63-57, but Meadowview answered right back with a Travis Stacey three pointer making it 66-57 with 3:37 remaining.

Moorer stole an Autauga pass and missed the layup on the fast break, but Lawrence was right there for the put back to increase the lead to 68-57 with 3:13 left.

The Generals were forced to foul down the stretch with time running out.

Lawrence led the Trojans with 37 points, while Stacey added 22 points and Moorer had 10 points.

The win continued a streak for the Trojans, and Jones said the team looks to be peaking at the right time.

“We’ve won three games in a row,” Jones said. “It looks like we’re finally turning the corner as we get into region play.”

The Trojans will take the floor again on Friday when they hit the road to play Lakeside.