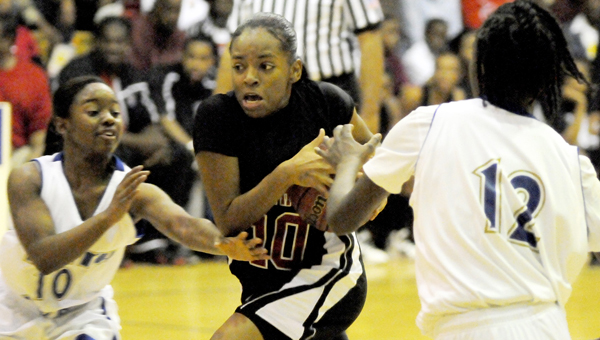 Southside’s Takari Nelson drives to the basket against Keith’s Stephanie Carson. The Lady Panthers defeated the Lady Bears in the first meeting of the season between the two rivals. -- Robert Hudson

ORRVILLE — In a battle of rivals it came down to the final seconds, as the Southside Lady Panthers defeated the Keith Lady Bears 39-37 Friday in Orrville.

“The key tonight was just staying focused,” said Lady Panthers head coach Jason Bothwell. “We knew it was going to come down to the last few seconds. We just had to keep composure, and even when I didn’t keep composure, they (the players) kept composure, and they continued to listen. That’s why I love this group so much, because they’re so coachable.”

After trailing since 4:07 in the second quarter, the Lady Bears would come back in the fourth period, as Dasheena Thomas would put in a basket down low to give Keith a 35-34 lead with 1:49 remaining.

But the Lady Panthers would take the lead right back, as LuShunda Geeter hit a jumper in the lane to make the score 36-35 with 1:20 left to play.

Keith would take the lead back with 1:02 left to play when Harriet Winchester hit two free throws.

Southside would answer back with a Tanisha Blevins three pointer to give the Lady Panthers a 39-37 lead with 0:39 left.

Both teams would miss a pair of free throws down the stretch.

The Lady Bears would have one last chance with three seconds remaining, but Winchester’s attempt from half court did not fall.

“We had no rebounding. We just played bad.”

Blevins led the Lady Panthers with 13 points, while Thomas led Keith with 11 points.

The Keith Bears controlled the first half, but the Southside Panthers would storm back in the final two quarters to take a 64-57 win Friday in Orrville.

“The guys came out and they were resilient,” said Cedric Brown, head coach of the Panthers. “Keith’s a great ball team. Good luck to coach Tisdale. Like I said earlier this week, we knew they were going to make a run. We kind of countered their run with a run, and it just seemed like we couldn’t stop running.”

The Panthers would trail by as much as 15 points in the first quarter, but would fight back and go into halftime down 26-23.

The third quarter belonged to Southside, as they would take a 32-30 lead with 5:10 left in the third and would not look back, ending the quarter with a 44-34 lead.

The Panthers would take a 58-43 lead midway through the fourth quarter, but the Bears would fight back to within nine points, as a Rodney Ellis three made the score 60-51 with 1:22 left to play, but the Panthers held off the rally.

Bears head coach Tommy Tisdale said the game changed in the second half.

“It looked like a tale of two halves, honestly,” Tisdale said. “I thought we did a good job in the first half of running our sets and getting the shots we wanted. They made a run at the end of the first half. I’m proud of my guys for playing to the end. I said before, Southside’s a good team. My hat goes off to coach Brown.”

Sammarkus Jones and Mario Oliver led Southside with 16 points each, while Ellis led Keith with 21 points.

Pride on the line

Both the Keith High School and Southside High School coaches are expecting their players to be in overdrive when the... read more