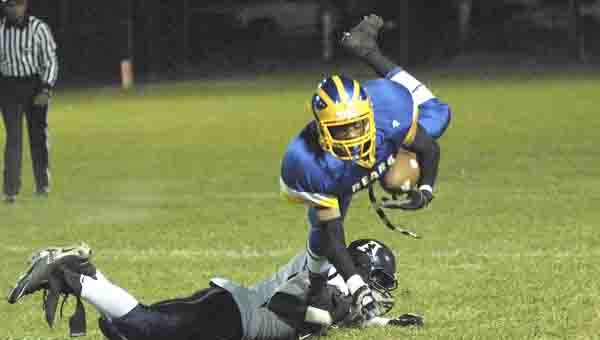 Keith High School running backs have been working to eliminate turnovers this week, head coach Harry Crum said. The Bears will tune up their game this week against Marengo County before a first-round playoff game at Sweet Water. -- Robert Hudson

The Keith Bears have already clinched a spot in the Class 1A state playoffs and they know who their opponent is in the first round, but they still have something to play for entering the final game of the regular season.

The Bears have already locked up a spot in the Alabama High School Athletic Association Class 1A state playoffs, as they’ll travel to Sweet Water on Nov. 4.

Neither a win nor loss will change that, but Keith head coach Harry Crum said the game is still important for the Bears.

“We try to do our best to keep them focused and let them know that it would make us 8-2, and we haven’t had that kind of record since 2008,” Crum said.

“It’s a pride thing and we just want to continue to stay on a roll and end the regular season on a positive note. Hopefully, that can give us some carry over to the playoffs.”

Crum said the Bears have been working in practice to prepare for Marengo’s double-wing attack.

“We’re working on different defensive sets,” Crum said. “If they’re anything like they were last year, they run the double wing. I know we’re going to have to get prepared for that.”

Another thing the Bears have been working on is protecting the football, after they fumbled a few times in last week’s game against Autaugaville.

“That was something that was very, very unusual for us,” Crum said.

“We work on handoff drills in practice to try and make them cognizant of being real protective of the ball.

“Autaugaville was well coached. Some of them (fumbles) were just us being careless with the ball, but some of them were because they were stripping the football. They were taught to go for the strip and that’s just a part of the game. We just tell our guys to beware of that and take care of the ball.”

Crum said controlling the football is important, as it’ll be one of the keys to defeating Marengo on Friday night.

Zollie Glover gets loose for extra yardage in Southside’s win over Dallas County. The Panthers are hoping to build momentum... read more