Trojans end season on the road 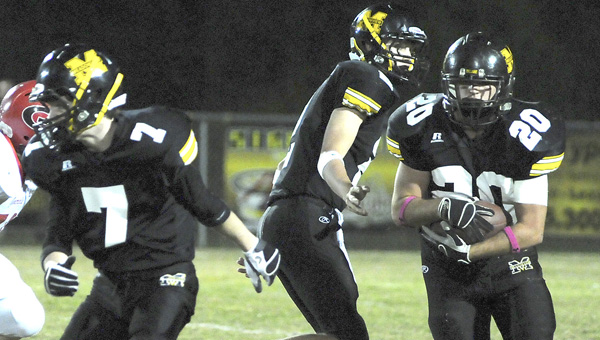 Meadowview Christian School’s Joey Raybon looks for running room in Friday’s loss to Abbeville Christian Academy. Raybon and the Trojans will have one more shot at a win Friday night at Chambers. -- File photo

The Meadowview Christian School Trojans are looking to capture a win and carry over some momentum into the offseason.

Trojans head coach Lebo Jones said the team is looking to bring home a victory and find something positive to build on.

“Obviously, we’d like to win the game and look to have a positive step toward next year,” Jones said. “We’re going to go to Chambers and we’re going to do the best we can, and try to keep a positive attitude like we’ve done all year.”

Jones said the Trojans have been working on the basics to give themselves a chance to win.
“We’ve been working on blocking and tackling a lot,” Jones said. “We’ve also been just trying to get guys in the right position where we feel like where they need to be so we’re in the best position to win.”

Jones said the Rebels are a spread team that likes to focus on the run to give opposing defenses a hard time.

“They’ve got a real explosive offense,” Jones said. “They run a spread-type offense and they don’t throw the ball a lot. They run the ball a lot out of the spread. They’re a real good offensive team.”

Jones said a win for the Trojans would be something positive they could build on going into the offseason.

“A win would be huge for us, the school and the fans,” Jones said. “It would be something positive to build on going into next year and spring training. It would be a good, positive thing for us.”

Hornets down to last shot

The Dallas County High School Hornets will have one more shot at scoring a win when they travel to Calera... read more